The Sloth: A New National Symbol for Costa Rica

Some of the most important national symbols of Costa Rica are the flag, the national shield, the flower ‘Guaria Morada, the Guanacaste tree, the white-tailed deer, the clay-colored thrush (Yigüirro), a percussion instrument called ‘Marimba’, coffee, and Manatees.

And now, thanks to the initiative of legislator Yorleny León Marchena, the sloth has recently become a new icon for the ‘Pura Vida’ country.

The sloth became an unofficial symbol many years ago. In a way, it does represent the spirit of the Costa Ricans, as expressed in the official document written by legislator Yorleny León Marchena. Just like sloths, Ticos (the local term for Costa Ricans) are known for their peaceful attitude, slow-paced life, and little stress. Costa Rica is considered one of the happiest countries in the world, and the happiest in Latin America.

Sloths have long been used as the main ambassadors to promote tourism in Costa Rica, as you can see in this great promotion video featuring a three-fingered sloth as the main character:

The project of turning sloths into national symbols was the perfect opportunity to develop specific actions from the government and individuals to improve the lives of sloths in Costa Rica. So of course, we were ready to jump in and help.

Reasons to make the Sloth a National Symbol of Costa Rica

When the idea of this project was revealed by the national media, we immediately contacted the legislator in charge to offer our insights and experience on sloths. Gladly, just a few days later, we were contacted by the Legislative Assembly.

The project encouraged the Ministry of Environment to watch for the populations of sloths, protect the areas where they live, and identify key areas for conservation. It required the Ministry of Public Infrastructure to help regulate speed limits in key areas.  The draft also included a special educational program to be implemented by the Ministry of Education.

Although the project proposal was already quite good, it lacked some concrete actions that we considered vital to protect sloths in the wild: it didn’t mention the main conservation problems for sloths in Costa Rica: lack of scientific research, electrocutions, and dog attacks.

The following is a list of the institutions that were involved and provided suggestions to the legislators.

We wrote a list of suggestions based on our research and experience working in the field. Although we knew some of these suggestions would be complicated for a country like Costa Rica to enact, we had to give it a shot.

Because information on the ecology of sloths is scarce and in some cases, even basic data on natural history and ecological requirements are lacking, research and scientific knowledge are necessary for the creation and development of the best conservation strategies. Currently,  there are no accurate population counts of sloths in Costa Rica, making it difficult to determine the conservation status of both species in the country.

It is necessary to know the population trends through censuses, as well as to support studies on the genetics of the populations within the country. Therefore we suggested providing incentives of any kind for scientific studies, both from public and private institutions, such as universities, local governments, and/or non-governmental foundations.

Electrocution of wildlife is a big problem that particularly affects sloths: at least half of the animals electrocuted in the South Caribbean are sloths. The death rate after electrocution is very high. For this reason, we recommend prioritizing the isolation of existing single-phase, three-phase, and transformer lines by the company corresponding to each jurisdiction in areas where there is a high population density of sloths and considerable reports of electrocuted fauna. 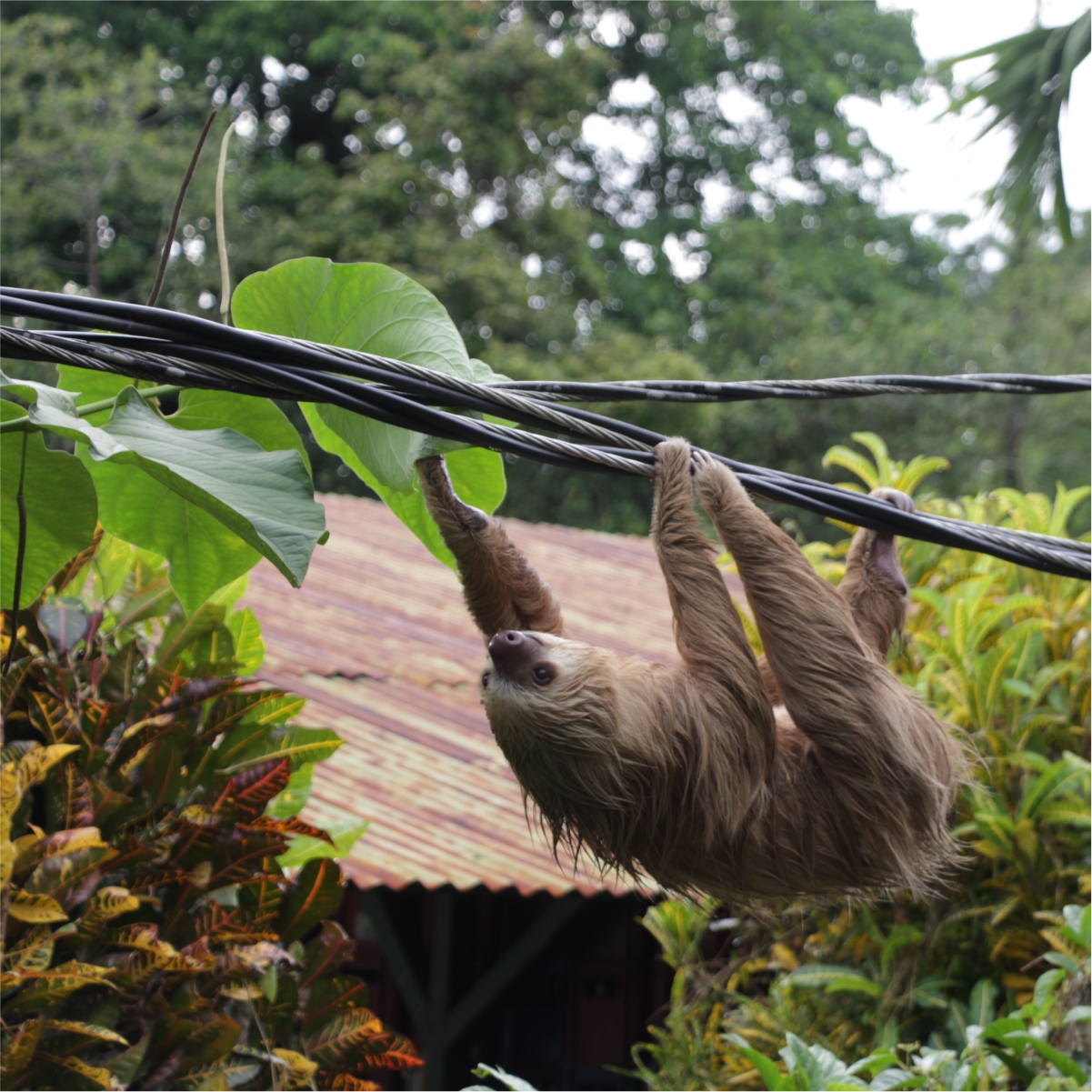 Our latest research on sloth genetics reveals that there are differentiated populations, and some have been affected by translocations carried out by both MINAE and rescue centers. Sloths are estimated to account for nearly half of the mammals admitted to sanctuaries and rescue centers. For this reason, we consider it of utmost importance that the competent authorities, advised by experts on the subject, develop a coordinated, nationwide protocol for the rehabilitation and release of sloths.

With regard to wildlife centers that admit injured and rescued animals, we proposed the creation of a national database where the statistics of these institutions would be made public. In this way, accurate information will be available on the number of sloths that enter these centers, and the reasons for their admissions. These comprehensive reports would create a more accurate picture of the issues that sloths face in particular areas in order to create consistent solutions.

5) Addressing the issue of free-roaming dogs:

According to public statistics from some rescue centers, dog attacks on sloths are becoming a recurring cause of admission. This is why we suggested reinforcing compliance with current laws on pet ownership from the corresponding agencies. The uncontrolled free-roaming and stray dog ​​population are not only a public health problem in general but also directly affects sloths and wildlife. We suggested more education campaigns on responsible dog ownership, and more frequent large-scale spay and neuter campaigns, especially in the regions where this problem is more prevalent.

The two-fingered sloths (Choloepus hoffmanni) and three-fingered sloths (Bradypus variegatus) are declared national symbols of Costa Rica’s fauna and of the country’s commitment to protecting forests.

It corresponds to the Ministry of Environment and Energy (MINAE):

b) Define, through technical studies, the list of priority places and critical habitat for sloth connectivity, as well as their threats and the genetic status of the populations.

c) Enforce all laws and international conventions that are related to the conservation and protection of the sloth and its habitat.

It corresponds to the Ministry of Public Works and Transport (MOPT):

d) Promote the regulation of speed limits, of the different means of transport, in the vicinity of sites duly identified as sensitive for the free movement of sloths; both around protected areas and outside of them.

e) Implement aerial wildlife crossings on national routes based on the implementation of the Environmental Guide: Wildlife-Friendly Pathways.

f) Define, through technical studies, the list of priority places with the greatest amount of wildlife-vehicle collisions of sloths and other wildlife species.

g) Coordinate with the Municipalities the implementation of aerial wildlife crossings on cantonal roads and ensure that roads located in natural resource protection areas or that intersect wildlife passage routes must have adequate structures that facilitate freedom of movement.  Passing from one side of the road to the other, in the places where the studies so determine.

It corresponds to the Costa Rican Electricity Institute (ICE) and private electricity companies:

h) Implement measures to reduce electrocutions with power lines, applying the Guide for the Prevention and Mitigation of Electrocutions of Wildlife by Power Lines in Costa Rica.

The Higher Education Council, in coordination with the Ministry of Public Education, may include the protection of the sloth and its natural habitat in its educational and awareness programs. For this purpose, the Ministry of Environment and Energy and its decentralized bodies and its institutional departments may advise.
Other government institutions, non-governmental organizations, public and private companies may also develop initiatives that promote the conservation of sloths and their habitat, in accordance with the provisions of the current legal system, particularly Law No. 7554, Organic Law of the Environment, of October 4, 1995, Law No. 7317, Wildlife Conservation Law, of October 30, 1992 and their respective regulations.

The Costa Rican Tourism Institute (ICT) may use the image of the sloth for its advertising campaigns, locally and internationally, in accordance with the provisions of the current legal system, particularly Law No. 7554, Organic Law of the Environment, of October 4, 1995, Law No. 7317, Wildlife Conservation Law, of October 30, 1992 and its respective regulations.
In addition, it may develop, in coordination with SINAC, actions, and protocols that promote good tourism practices that allow the protection and sustainable tourism with regard to sloth species.

According to the official document “the suggestions to include a sloth release protocol, the generation of databases, and the issue of pet management, specifically stray dogs,  was beyond the scope of the proposing legislator. However, those of us who signed this opinion consider that the general framework of the law does allows competent institutions to address these issues moving forward.”

So even if these points were not specifically included in articles and sections, this is still some uplifting news!

An interesting point made by MINAE and SINAC is that although both species of sloths are listed by CITES as ‘Least Concern, both institutions consider sloths to be endangered in Costa Rica.

We consider this is a huge step in formally recognizing and promoting all the conservation efforts we were carrying for the past few years. We feel a new future is on the horizon for sloths in Costa Rica, and we’re extremely happy to be part of it.