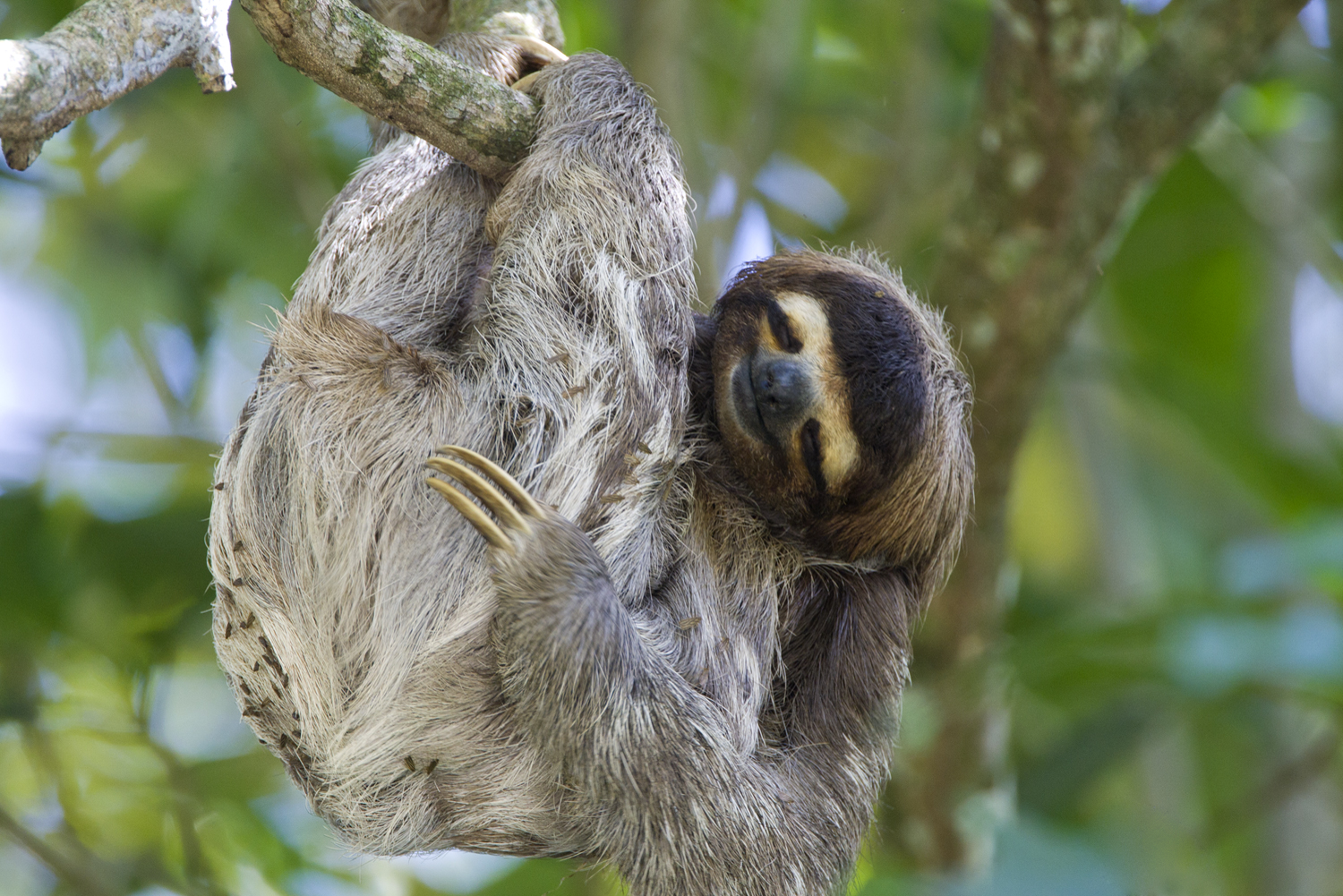 With a little help from my friends: sloth hair, moths, and algae

Sloths are naturally solitary animals, but they are not all alone up there in the canopy. In fact, sloths have an entire ecosystem living in their fur made up of different species of algae, fungi, moths and insects. That’s millions of organisms for company!

Sloth hairs have a unique structure that involves microcracks. These microcracks create the perfect environment for algae and fungi to thrive.

The microorganisms living in these cracks were investigated by biologists for the first time in 2014, and they discovered species of algae and fungi which have not been found anywhere else in the world!

These fungal species are currently being investigated by microbiologists, parasitologists, and oncologists alike, as some strains are showing uses in treatment for malaria, chagas disease, and even breast cancer.

Sloths have a mutualistic ectosymbiotic relationship with the ecosystem growing on their backs. The fungi, algae, and moths greatly benefit from this relationship as they have a habitat to thrive in. The sloth benefits because these organisms are key to the sloth’s best defense against predation – camouflage.

Hunters that use their sense of sight, such as raptors, will often bypass sloths when searching for prey because the growth of algae and fungi give the sloth’s fur a green tinge, allowing them to blend into the rainforest canopy. This, along with the sloth’s slow movement and other creepy crawlies that make their home in the sloth’s fur, means that sloths usually go undetected by predators who hunt by sight.

But what about the predators that hunt by scent? Sloths don’t produce any body odor at all! The growth of this ecosystem in their fur means that sloths look like the trees, they smell like the trees and they even move like the trees (very slowly).

When the sloth descends from the canopy once a week to go to the toilet, the moths will crawl from the sloth’s fur onto the fresh sloth poop to lay their eggs. This is the ideal place for these eggs to hatch, as the larvae are coprophagal which means they feed on the sloth poop. Once the larvae develop into moths, they will fly up into the trees to find an appropriate sloth to call home. And thus, the cycle begins again.

Without the sloth, these moths could not exist. The sloth gives these creatures a home and provides them with food – moths have a proboscis rather than a jaw, which they use to suck up the moisture from the sloth’s eyes and secretions from the sloth’s skin.

The circle of life!

This incredible sight had never been captured on film before, and it is not a behaviour that we were aware of! How often does this happen in the canopy while no humans are around to watch? Something similar has also been observed with a brown jay picking the moths from the fur of a three-fingered sloth!

So, if you ever see a green sloth covered in moths, know that that is a very healthy sloth with lots of ‘creepy crawlie’ friends!