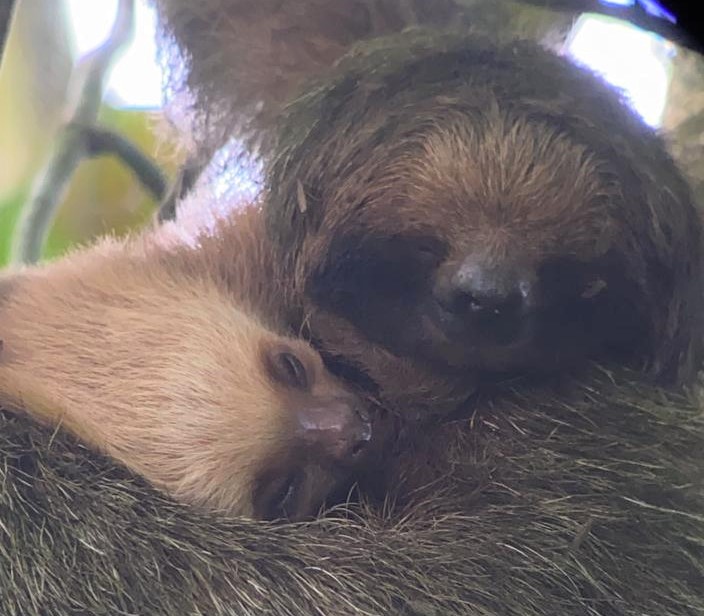 These two sloths are not only different species, but they belong to two completely different families, separated by over 30 million years of evolution. Cross-species adoptions like this are incredibly rare in the wild, with only 3 other documented observations of this happening.

On the 20th December 2020, Gerald Pereira and Oscar Solano Rojas were guiding a group of tourists in Costa Rica. Sloths are a common sight on these tours, but that day they saw something that they had never seen before – nestled quietly amongst the rainforest canopy they spotted an adult three-fingered female tending to a two-fingered baby sloth.

Gerald and Oscar, both with over 11 years of experience working as ecotourism guides, knew they had witnessed something important.

The curious pair were observed in a fragmented strip of rainforest, sandwiched between a river, a pineapple plantation and a busy road. According to Oscar, “in that area, local people take great care of the sloths, so we always go to look there because there is a very large population”.

“Yesterday we started the tour, which we call the ‘Sloth Tour’, as usual. To see them active in the early hours of the day, we started the tour at 6am. Around 8am we arrived at a place where my partner Gerald and I saw a sloth hanging from a Cecropia tree. At first, it did not attract much attention, we saw that she was a female and a baby, but that morning we had already seen 3 baby sloths, and we did not think it was anything special or different from what we had seen. When we paid more attention to them, however, we discovered that it was a three-fingered female and a two-fingered baby.”

“I had already seen the two species in the same tree many times, and at first we thought it was just a coincidence that they were there together. When we found them it seemed like they were waking up. They both started scratching, and then the baby separated from the female, fed on cecropia leaves a little, and I thought that was the end of the interaction.”

“But then you see how the baby returns to the female, and she receives it with total naturalness, that is what surprised us the most. None of us who were there could believe it, neither Gerald nor I, because we had never seen it before. It left me astonished. In rescue centres, I had seen a certain attachment between the two species, but never in their natural habitat, as happened to us yesterday.”

As can be seen in the video footage captured by Gerald and Oscar, it does indeed appear that the two sloths interact with the gentle tenderness of a mother-baby relationship. When they returned to the area the next day, they once again found the pair snuggling together in a shady spot in the canopy. It certainly looks like the bond between these two sloths is much more than just a fleeting interaction. It appears as though the female has formally adopted this baby as her own.

Adult animals adopting unrelated young is nothing new to science, but in most cases these are intraspecies interactions – meaning that they occur between two unrelated individuals of the same species. This has most commonly been observed within sociable species, often herd or pack animals.

Interspecies adoptions – where a female adopts a baby of a different species – is an altogether much rarer occurrence in the wild. In fact, there have only ever been 3 other documented instances of this happening, and it has never before been observed in sloths.

In 2004, a group of capuchin monkeys were documented caring for a baby marmoset, and in 2014 a bottlenose dolphin adopted a baby melon-headed whale and nurtured it for it for 3 years. More recently, a lioness in India was found to have adopted an orphaned leopard cub in 2018 and she raised it alongside her own offspring.

Why do cross-species adoptions occur?

In evolutionary terms, caring for another animal’s offspring like this doesn’t make much sense. Raising a baby demands a lot of time and energy (something which a sloth has a limited supply of), and it is usually done with the purpose of propagating an individual’s own genes. So why do cross-species adoptions like this sometimes happen?

The truth is, scientists are still trying to understand it. Because these events are so rare, there isn’t much information available and each observed case appears to be very different. There are two popular theories:

How did this happen?

The circumstances surrounding this adoption are not entirely clear, but SloCo founder and sloth expert Dr. Rebecca Cliffe has some ideas about what might have led to this unusual event.

“This is the first time that anything like this has ever been seen before in wild sloths, and it is certainly very interesting. I am used to sloths surprising us, but this has to be one of the most unusual things I have heard about. I suspect there are three possible scenarios which may have led to this happening:

1) Accidental human interference. Maybe someone found the baby sloth alone and tried to ‘reunite’ it with its mother, but accidentally paired it with the wrong sloth. Reuniting baby sloths with their mothers is a surprisingly common requirement for people in Costa Rica as babies are often found alone on the ground after falling from the tree.

A lot of people don’t realise that there are two very different types of sloth, and so they might not have realised what they were doing. In this situation, however, I would expect the adult sloth to reject the baby and so this feels like an unlikely scenario

2) The baby sloth lost it’s own mother, and instinctively clung onto the fur of another sloth. Baby sloths are born with a strong instinct to cling onto mom’s fur, and if they are separated, they tend to cling onto the next best thing. It isn’t impossible to think that this baby may have climbed onto the three-fingered sloth after becoming orphaned. However, in this situation I would also expect to see the adult sloth looking agitated and stressed out by her new uninvited companion – and I doubt the relationship would last more than a few hours.

3) The baby sloth lost its own mother, and the adult sloth recently lost a baby of her own. This unusual combination of events would provide a feasible opportunity for the pair to bond naturally due to a mixture of instincts and hormones. Although extremely rare, I think this is probably the most likely scenario!”

This unprecedented behavior leaves all of us with many questions – particularly regarding the welfare of both sloths! Will the baby survive? It’s certainly possible. While they are different species, they do share a broadly similar ecology.

The diets of both sloths overlap heavily, with both being predominantly folivorous (eating only leaves). Two-fingered sloths tend to be more flexible and adaptive with their choices, while three-fingered sloths are more selective about what types of leaf they will eat. With both species, babies maternally inherit knowledge about which trees are safe to feed from – and this arrangement may work in the baby’s favor!

Furthermore, it appears as though the baby sloth is approximately 7 months old. At this age, the baby would not be as reliant upon a steady source of milk from the mother as the natural weaning process would be taking place. Although the adult female could be producing milk, we don’t think this is essential for the survival of the baby at this stage.

Two-fingered sloths are also much larger than their three-fingered counterparts when fully grown, which means that the adoptive mother may have a challenge on her hands when lugging around her overgrown offspring.

But what happened to the baby’s biological mother? This remains a mystery. Considering the location in which the pair were observed is highly disturbed, it may be that she got into trouble with the busy road or nearby pineapple plantation. Or perhaps there was an accidental baby mix-up, and somewhere in the rainforest, a mother two-fingered sloth is tenderly nurturing a baby three-fingered sloth. It’s doubtful we will ever know for sure.

While there are certainly a lot of challenges for this pair to overcome, here at SloCo we have high hopes for their survival. After the unprecedented global difficulties that 2020 has brought, we are happy to embrace this heart-warming story (which has all the makings of a future Disney movie!).

We will be working closely with both Gerald and Oscar to monitor the two sloths as time goes on – we will keep you updated on their progress! For now, we are keeping our fingers and toes crossed for a happy ending.

It’s with a heavy heart that we must inform our supporters that the wild three-fingered sloth mom that was found to be caring for a two-fingered baby has passed away.

Local guides who were tracking the pair witnessed the mom and baby fall from their tree. Unfortunately, mom did not survive the fall. The baby was uninjured and climbed back up into the tree.

The guides continued to watch over the baby for the rest of the evening, and returned to the spot every day to check on him – but after three days he had ventured off on his own into the rainforest.

We estimate that the baby was around 8 months old, at which point he would naturally begin to distance himself from his mom. Team Sloth is optimistic that his two brilliant sloth moms taught him everything that he needs to know in order to survive in the wild!