Although it was on display for a long time at the Museum of La Plata, Argentina, its age was uncertain. A new study indicates that giant ground sloths lived 13,000 years ago and coexisted with the first humans of South America.

The mummified skin of the mylodon was found on a scientific expedition organized in 1899 by the Museo de La Plata (UNLP). Mylodons were an extinct genus of animals that lived during the Pleistocene, a period that ranged from approximately 2.5 million to 10 thousand years ago.

Since it was first discovered in 1899, it has remained on exhibit. The artifact is a true treasure considering its surprising degree of preservation: it still has hairs and soft parts. After extensive discussions about its age, this remarkably preserved skin lost the interest of paleontologists until recently when a group of experts resumed studying it and dated it again. This time they used sophisticated techniques that left no room for doubt: the owner of that tissue lived about 13,200 years ago. This discovery has just been published in the journal Quaternary Science Reviews.

The skin of the giant sloth

The giant sloth – the common name for this genus – was one of the largest land animals in South America, weighing more than 1 ton and measuring 3 meters (almost 10 feet) in length. It had huge claws and walked on all fours, although it is thought that it could also stand on its hind feet (bipedal). With its herbivorous habits, it was part of the South American megafauna, the large mammals that dominated the planet during the Pleistocene.

The skin was found in the Cueva del Milodon (Milodon’s cave), a natural formation located in southern Chile that was explored in the late 19th century. The cave contains countless paleontological remains, and even evidence of early human activity. At that time the geographic limits of Argentina were still being established, which allowed for expeditions of many different origins to go and collect materials. As the story goes, when Argentinian naturalist Florentino Ameghino first saw the remains, he assumed that they belonged to a living species. This led him on an impassioned quest to find a living specimen, which of course did not happen.

“The skin is really striking: it is a centimeter and a half thick with long reddish-yellow hairs and it is hard like wood. In what would be the interior, it is covered by a ton of small bones, similar to a suit of armor, which is typical of some species of fossilized sloths,” explains Néstor Toledo, CONICET (National Council for Scientific and Technical Research) researcher on the Faculty of Natural Sciences and Museum of the National University of La Plata (FCNyM, UNLP) and one of the authors of the work.

First dated in 1974 with questionable results, the team of scientists sent a sample back to the same radiocarbon laboratory in the United States that had done the original analysis. They used a method to determine the age of carbon-containing materials and this time it was clear that that the sample was over 13,000 years old. The authors of the study also sent a fragment of skull bone from the same cave to an Argentinian laboratory which turned out to be 11,300 years old. This was the same age of two bone tools carved by ancient humans that were found next to the sloth hide, according to the original reports of the find.

The specialists also examined two sloth shoulder blades, one belonging to the local collection and the other belonging to the Zurich Museum of Natural Sciences. These bone pieces, which were dated between 12 and 13 thousand years old, have cut marks on made by tools and evidence of them being dragged across the ground. “This constitutes indirect evidence of human presence, that of course must continue to be studied, but it is an indisputable proof of coexistence with human beings and, if verified, it would be one of the oldest records in South America,” says Leandro M. Pérez, CONICET researcher at the FCNyM and leading author of the publication. This question takes on a special interest considering the debate on whether or not this giant fauna coexisted with these first settlers.

In addition to the new ages obtained, the investigation includes an exhaustive review of  the dating methods of all the mylodon remains found in that same cave which appear in the scientific literature. Starting with the first of them, carried out in 1951 by Williard Libby, the winner of the Nobel Prize in Chemistry in 1960 and creator of the radiocarbon method, they verified a total of 36 records, discarding those that were unsuccessful or uncertain.

“We have taken on the monumental job of searching for each published piece of information, tracking the sample it refers to, and calling the laboratory in charge of dating it to trace a match between these references. We found some errors and we left only those reliable historical values,” ​​Pérez explains, and adds:” It is not that before they worked badly, but that the protocols that we use today did not exist at the time. For example, they didn’t understand the importance of including a photo or a drawing of a material or assigning it a catalog number in the collection.

As a final reflection, the researchers highlighted two important values ​​of their work. “On the one hand, there is interest on the climatological level, since it was a time of intermittent glaciations. Despite the very harsh conditions due to the cold and the amount of ice, this cave was inhabited continuously for at least a thousand years, according to our bibliographic review. For this reason, it raises countless questions about how this fauna could have evolved, which in the case of the ancient sloths were gigantic and woolly, while their current relatives are small and live hanging from the trees in tropical jungles,” argues Toledo. 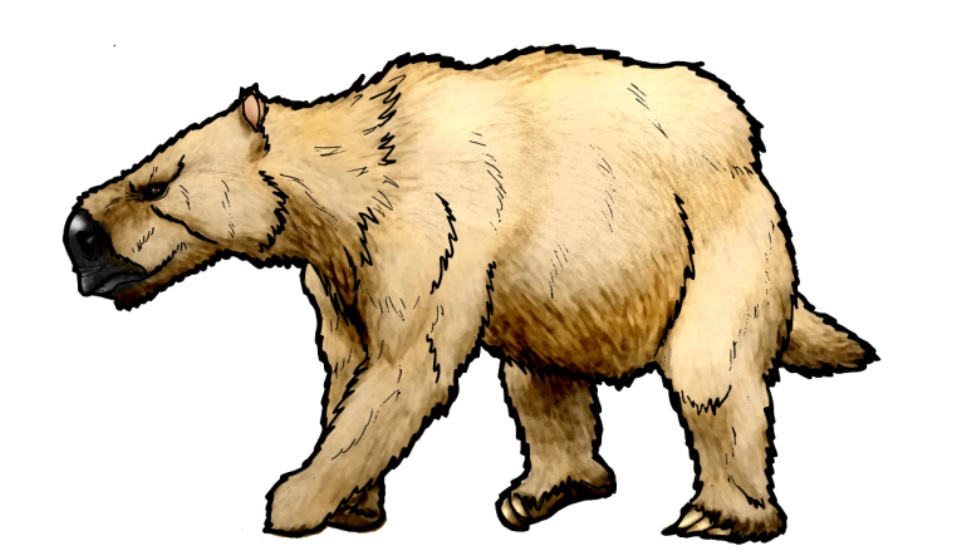 Pérez alluded to a second relevant question, related to “the importance of valuing the heritage we have and the way the naturalists worked at that time, people who traveled to distant and hostile places without even knowing if they would return alive. Many museums in the world have pieces from this site because they were bought from collectors. But on the other hand, very few, like ours, have materials recovered in scientific expeditions organized and led by researchers from the institution.”

Mummification: yes or no?

Although there is talk of “mummified” skin, in reality it is unclear if the term exactly applies to the way the famous “sloth leather” was preserved. “It is not how one might imagine an Inca or Egyptian mummy, subjected to a series of deliberate treatments to preserve it in this way. There was no dehydration here because the cave was terribly cold and humid, and it wasn’t from freezing either.

What took place was a more complex process. Right now we are carrying out a chemical analysis on some of the microcrystal sheaths that cover each hair, that we saw through electron microscopy,” described the authors, who speak of a kind of “natural tanning.” The material was buried under a meter-thick layer of manure that was compacted, and therefore lacked oxygen. “We think that the excrement produced the release of tannins, chemical compounds that are used to tan leather, and that spontaneously triggered the process,” concluded the experts.