Sloths and cacao: You can have your chocolate cake and eat it too

There comes a point in childhood when we begin to understand the concept of finite resources. The oft-used phrase, “you can’t have your cake and eat it too” captures the idea that we often have to choose between the things that we love.

However, if you love sloths AND chocolate, you might not have to make that painful choice between enjoying chocolate cake and enjoying the presence of sloths in the wild. 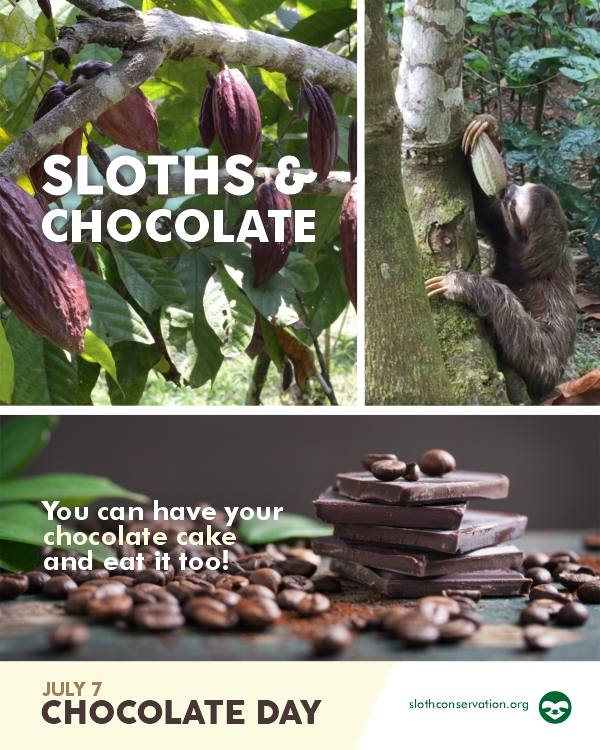 Where chocolate comes from

Chocolate comes from a medium-sized tree that grows in the understory of tropical forests. Growing directly from the bark of the cacao tree are large colorful pods, that are filled with seeds covered in a thin layer of sweet, fruity pulp. Once mature, the seeds are harvested, fermented, roasted and ground to make chocolate. Traditionally chocolate was drank unsweetened and has deep cultural and spiritual significance for many indigenous communities.

The origins of cacao

Because cacao grows best in the shade of other trees they are often found in agroforestry systems. Agroforestry systems consist of food crops growing underneath a forest canopy and have been cultivated by indigenous communities for thousands of years.

The Amazon rainforest, once thought be a wild and untamed place, has actually been profoundly shaped by 8000 years of indigenous agroforestry. Although the exact origins of cacao are debated, some of the earliest evidence of cacao in pre-Colombian societies was over 5000 years ago in South America.

How chocolate benefits sloths and people

You may be accustomed to hearing how many food crops, from palm plantations to pineapples, threaten wildlife in tropical ecosystems. Large monocultures inundated with pesticides and herbicides threaten the health of humans and wildlife alike while reducing and fragmenting the habitat that remains.

Agroforestry practices are a powerful way to maintain biodiversity primarily because, unlike most conventional agriculture, the cultivation of crops does not lead to the elimination of the forest canopy. In fact, many agroforestry systems actively promote biodiversity and soil health by maintaining a comparable level of plant diversity as found in the adjacent forest.

Sloths have even been known to eat cacao leaves and pods. Fortunately sloths do not pose a threat to the cacao trees because they eat very few leaves on a daily basis (it takes them 30 days to digest a single leaf)!

One of the most potent threats to cacao in its recent history has been due to a fungal disease known as monilia. The fungi that cause this disease raged untamed for many years causing farmers to lose up to 80% of their cacao and eventually abandon their farms.

In addition to monilia, one of the main threats to cacao today is the shift that small farmers of Costa Rica are concerned about. The abandoning of small-scale farming in exchange for industrial-scale farming and a growing disinterest in the next generation.

After monilia swept through the region, many cacao farms were abandoned. However, thanks to the resistant strains and the hard work of farmers, cooperatives and scientists, chocolate in the region may not have a bitter future after all.

Finca La Cabra Feliz (The Happy Goat Farm) is an agroforestry farm just north of Cahuita National Park in Costa Rica. We had the pleasure of visiting Don Roberto Selina’s certified organic, Fair Trade, and Bandera Azul accredited farm which is home to a great variety of fruiting trees and wildlife (and happy goats of course)!

In addition to producing chocolate, fresh goat milk, and a diversity of tropical fruits, Don Roberto Selina has a tree nursery of his own, planting endangered trees such as the Cola de Pavo (Turkey’s tail tree) (Hymenolobium mesoamericanum).

Don Roberto Selinas’s farm is an invaluable resource for the ecological and local community. He believes in sharing. The fruit growing on the trees is plentiful enough to be shared with wildlife and he teaches agroecology to local students and visitors that come to the farm.

La Cabra Feliz was brought to our attention because it is one of the model farms that is part of a local cacao cooperative, Coopecacao Afro, which unites and supports Afro-Caribbean communities. At the helm is Don Edgar Campbell, a respected community member, teacher and thought leader.

Central to Coopecacao Afro’s mission is the understanding and appreciation of natural systems, actively cultivating and making space for the biodiversity that sustains us. They remember the time when the river was full of fish that could sustain families (before the arrival of banana plantations). They speak of a striking a green and black bird that was a staple of life in the Caribbean which can no longer be found.

CoopeCacao Afro and many other farmers are concerned by the loss of biodiversity and the transition away from ways of life that are more in harmony with the natural world. They aim to preserve the cacao agroforestry systems that remain while educating the next generation, strengthening communities and ensuring a future for these valuable communal resources. 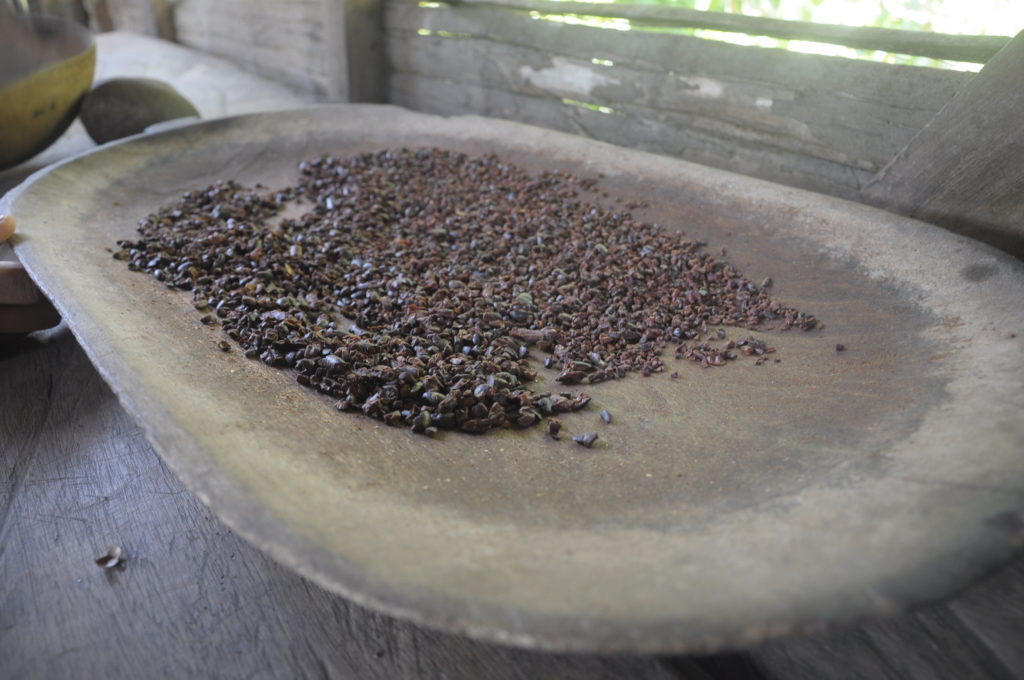 How can you get involved?

If you are interested in purchasing chocolate that is wildlife-friendly and empowering to communities, look for Fair Trade, shade-grown cacao. Be on the lookout for ingredients such as palm oil which threaten a variety of wildlife from critically endangered orangutans to grey-capped central american squirrel monkey in Costa Rica.

If you have the chance of visiting or living in a country where cacao is grown, engaging in agro-tourism that supports small farms such as Don Roberto Selinas is a wonderful way to learn firsthand about the how cacao is grown and processed (and of course you can buy these delicious products directly from the farmer!).

We at SloCo are developing a sloth-friendly chocolate program, designed to benefit sloths and the communities they reside in. Due to the ongoing pandemic and social distancing measures, some of our community-based programs have been put on pause. As soon as it is safe to do so, we will be launching this program, so stay tuned!