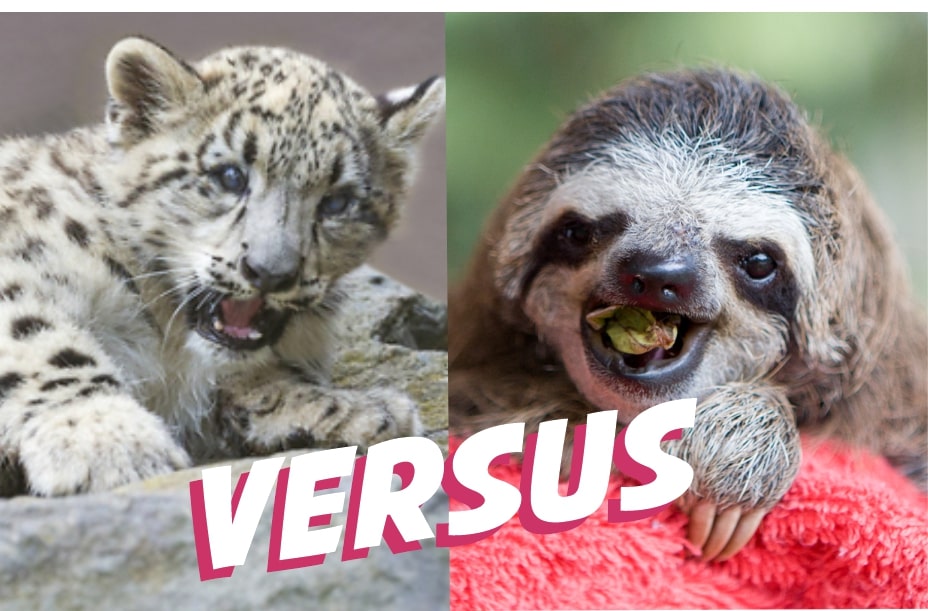 The sloth and the snow leopard (Panthera uncia) seem like two animals that have absolutely nothing in common. After all, they live on opposite sides of the planet from each other, prefer habitats that couldn’t be more different without being under water, and one is a small herbivore that eats leaves while the other is a large predator that eats whatever it wants.

Superficially, they couldn’t be more different animals, but we think that if the sloth and the snow leopard ever sat down to have a cup of tea together, they’d have more to talk about than you’d think!

Both animals are in the class Mammalia, subclass Theria, and infraclass Placentalia; this means they are both furry mammals that carry their young in their wombs and basically aren’t platypuses.

Other than that, they haven’t shared a common ancestor since the time of the dinosaurs. Although snow leopards live exclusively in the mountains of South and Central Asia, their ancestors evolved in the Americas, not so far from the South American ancestors of the sloth!

Where do they live?

Sloths and snow leopards are both remote creatures that are difficult for scientists to study. The sloth lives deep in the hot trackless jungles of the New World, while the snow leopard lives high in the mountains of Asia, where the air is thin, dry, and cold.

Some populations of snow leopards also come down into the Gobi Desert following herds of wild sheep and goats. All of these regions are difficult for humans to navigate and study, and the animals that live there remain largely mysterious to science.

Though separated by a distance of over 15,000km (nearly 10,000 miles), both animals prefer habitats far off the beaten path!

Do they make friends easily?

Like sloths, snow leopard territories overlap with each other, but neither animal interacts much with others of their kind except when mating.

Both sloth and snow leopard mothers raise their young on their own, a process that takes about a year for sloths and up to two years for snow leopards.

Young sloths will sometimes have a home range initially near their mothers, and young snow leopards will sometimes come back to visit before they are fully mature. Though sloths have a lot of tolerance for sharing trees with other sloths, they would likely identify with the snow leopards’ drive for independence.

The sloth has a reputation for sleeping a lot, but this reputation is owed to lazy human researchers, not to the sloths themselves! Sloths only sleep for eight to ten hours per day, whereas most cats sleep for 12-16 hours every day.

Sloths even “cat-nap” more frequently than snow leopards do, with short rest periods throughout the day, whereas the snow leopard is primarily active during dawn and dusk, though they have also been observed during the late afternoon.

How about those tails?

This is one area where snow leopards and sloths couldn’t differ more! Snow leopards have long, thick, furry tails which they use as a rudder while running up and down mountains. They also use these tails as mufflers to wrap themselves up when the weather turns freezing cold.

Three-fingered sloths have short, stubby tails they only use when going to the bathroom, and they wouldn’t know what to do if the weather ever froze. Sloths would just turn instantly into popsicles; unlike the hot-blooded cats, they cannot regulate their temperature very well.

Sloth and snow leopards both have thick fur coats they depend on for survival. Like all mammals, thermoregulation is hugely important to their survival, and their fur is important insulation and camouflage.

The dense, beautiful snow leopard pelt is the longest and thickest of any felid. This fur is much sought after by humans, though hunting snow leopards is illegal in all 12 countries where they reside.

Sloth pelts, on the other hand, would never become a fashion statement for humans—only the sloths think that green algae, anti-cancerous fungi, and a whole colony of sloth moths count as haute couture!

What do they do about humans?

The biggest concern that sloths and snow leopards have in common is their relationship to humans. Both animals are threatened by habitat loss, both animals and illegally hunted for the pet trade, and both animals suffer from human ignorance about their needs and habits.

Sloths are often mischaracterized as lazy and diseased, when in fact they don’t sleep much more than humans, and the anti-microbial properties of their fur have great potential for fighting diseases that threaten humans!

Snow leopards are incorrectly thought to be dangerous to humans and a threat to livestock, when in fact snow leopards are very shy and try to avoid confrontations with humans at almost all costs. These big cats would stay away from people if they had anywhere to go.

Neither sloths nor snow leopards make good pets, but luckily they both make excellent virtual adoptions! There are organizations all over the world fighting to understand and protect these awesome animals, such as  Snow Leopard Conservancy, and both benefit from humans that help spread awareness and fight for their right to exist.

One thing we’ve all got in common is this earth, and saving the world for one species saves it for us all!