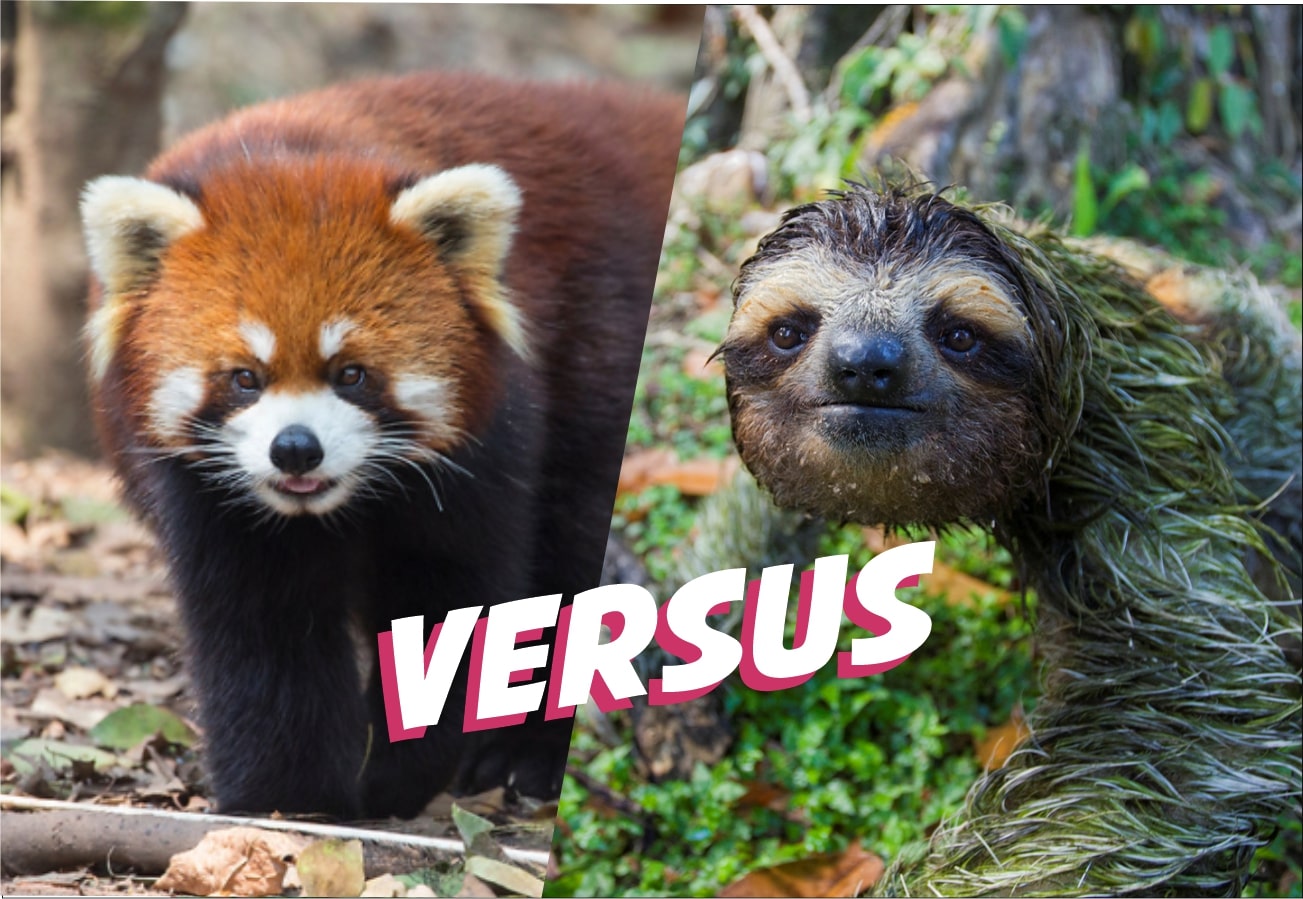 Not to be confused with the giant panda, the red panda (Ailurus fulgens) is a small, furry mammal slightly larger than a house cat and completely unrelated to sloths. Red pandas are slightly more related to giant pandas than they are to sloths: the giant and red pandas parted ways just over 30 million years ago… about the time two- and three-fingered sloths diverged.

In fact, red pandas and giant pandas, like two-fingered sloths and three-fingered sloths, are examples of convergent evolution. Both species of sloths have evolved to look and act very similar in order to occupy the same ecological niche, whereas the bamboo-eating habits of red and giant pandas have given both animals “false thumbs” in order to better grasp bamboo shoots.

Family of their own

Sloths are members of the order Xenarthra, related to armadillos and anteaters; whereas the red panda is in the superfamily Musteloidea, related to skunks and weasels.  (The giant panda, which we’ll stop talking about now, is actually a kind of bear.) Most recent genetic research, however, places red pandas in their own, independent family: Ailuridae.

Although all Musteloidea are in the order Carnivora, red pandas are not particularly carnivorous, which brings us to our first similarity: like sloths, they eat mostly plants!

Sloths of course eat only tropical leaves, whereas the red pandas eat primarily bamboo, but they might find some food groups in common if only they lived on the same continent. Or at the same elevation. Or had any overlapping territories at all, really.

Unfortunately for both of them, deforestation and habitat fragmentation are a worldwide problem, and red pandas are endangered and fighting for their survival due to human-caused threats, currently the poaching and illegal trade of their pelt has emerged as a biggest threat.

Another similarity between these furry would-be friends is that neither of them really has many friends. As in, the kind of friends you hang out with socially. Maybe they maintain some long-distance friendships, but sloths and red pandas are both solitary animals whose adults don’t socialize much except for the necessity of mating.

Unlike sloths, red pandas are territorial and don’t even invite other red pandas over at all—so perhaps sloths and red pandas should just respect each other’s space and agree to be pen pals.

Red pandas in captivity can live for 14 years—as opposed to sloths, which can exceed 50 years in the case of two-fingered sloths. Both animals have primarily been studied in captivity, and scientists are still learning about how the behavior of wild populations differs from captive ones.

Sloths and red pandas make excellent movie stars… in animated films, anyway. From Sid in Ice Age or Pricilla Trippletoe in Zootopia, these iconic creatures are fun to imagine onscreen. Like sloths, red pandas possess an irresistible appeal—just look at those ringed tails, and red and white faces!

Mei in Turning Red takes it to a whole new level in Disney Pixar’s latest film, succeeding such red panda icons as Master Shifu, in Kung Fu Panda, and Retsuko of the series Aggretsuko. So long as people’s takeaway from these movies is to respect these creatures in their wild homes and raise awareness of the threats they face (as opposed to thinking they need a sloth or red panda as a pet) this can only be a good thing.

Red Pandas are an endangered species

Wild red pandas, like wild sloths, face many threats to their survival. Conservation of habitat is key, but red pandas face illegal trafficking in greater numbers than sloths. Whereas no one really envies the sloths, their lovely algae-green fur, the thick fluffy tails and skin of the red pandas are considered luxury items by some unscrupulous humans.

Last but not least, if you’d like to be a scrupulous human, make all your adoptions of sloths and red pandas virtual ones! Both animals are adorable, but neither makes good pets. Red pandas are mostly nocturnal, not very social, have specialized diets, and (in case that’s not enough) they poop out the equivalent of their own body weight every week! So let’s leave sloths, red pandas, and their respective toilets where they belong—out in the wild.

The Red Panda Network and The Sloth Conservation Foundation are leading the fight to protect these incredible animals in Nepal and Costa Rica, and you can support their work by making a donation, adopting a Red Panda, or adopting a sloth!