September 26th is ‘Save the Koala Day’ and here at the Sloth Conservation Foundation we want to celebrate by sharing some of the differences and similarities between these marvelous marsupials and our beloved sloths. We would also like to shine a spotlight on organizations like Friends of the Koala based in Australia who work tirelessly to rescue, rehabilitate and release sick and injured koalas and protect their remaining habitat.

As humans, we tend to make assumptions about things we don’t understand. When Europeans first landed in Australia and saw koalas, the assumption was made that these strange creatures were bears, which is not unsurprising with their rounded ears and button noses. So, they were named ‘Koala Bears’ – a rather unfortunate name considering koalas are actually marsupials, a far cry from any bear species). 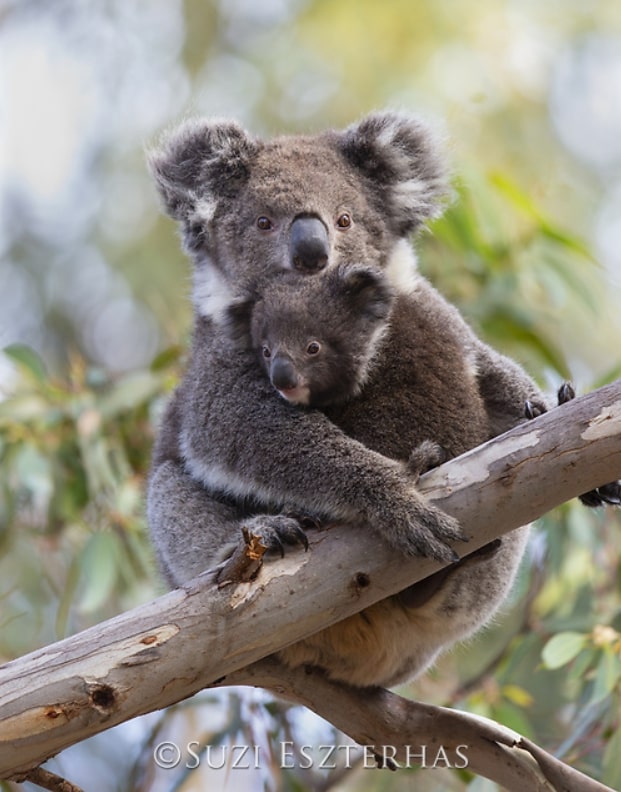 Sloths share this misnomer, with their Spanish name, oso perezoso, directly translating to “lazy bear”. These two bear imposters share many similarities despite living and evolving continents apart. They also share many of the same misconceptions. In honor of September being Save the Koala month, Team Sloth is here to set the record straight on these non-bear brothers from another mother!

Are Sloths and Koalas related?

No! Although these animals do share some similarities, such as herbivorous diets and arboreal lifestyles, sloths and koalas developed these traits independently of each other. Sloths are mammals classified in the order of Pilosa. The closest relatives to the sloth are anteaters and armadillos – these three make up the extant Xenarthra superorder species and can be found in Central / South America.

Koalas are marsupials from Australia. They are classified under the order Diprotodontia and are most closely related to wombats. Like all marsupials, the koala gives birth to underdeveloped young (called joeys) that crawl into their mothers’ pouches, where they will stay for the first six months of their lives. Sloth babies cling to their mother’s chest for approximately six months as well, but they are born fully developed with open eyes, teeth, and claws.

Leaf eaters unite! Not many animals can survive off of a diet that consists only of tree leaves, but koalas and sloths are two animals that can due to their specialized digestive systems.

The Koalas’ diet is limited to certain eucalyptus leaves and a few other related tree species such as Melaleuca, Callistemon, and Lophostemon. Koalas are unique in their ability to eat eucalyptus leaves which have high levels of cyanide and are toxic to most other animals. 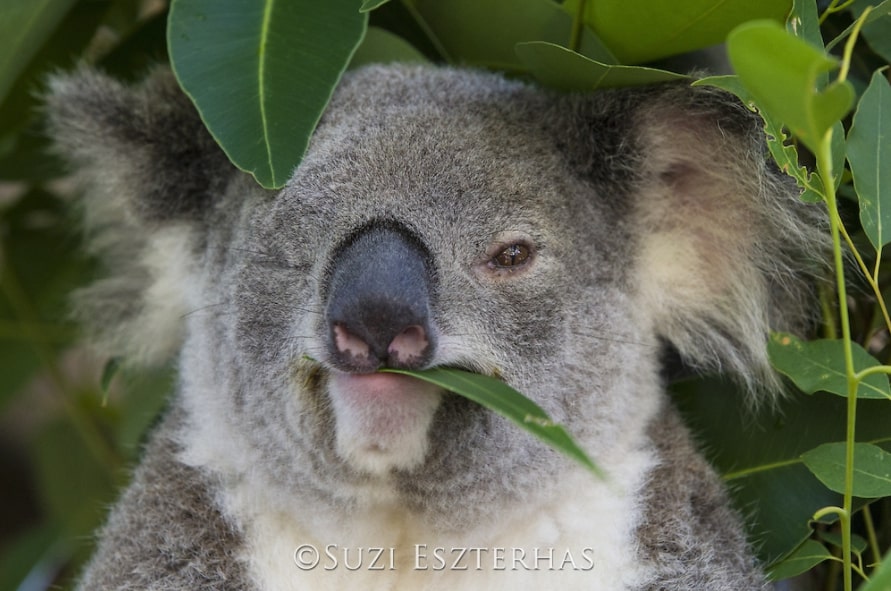 Koalas have developed a special organ called a caecum which allows them to better process the toxins by utilizing bacteria that break the toxins down. Interestingly, they are not born with this bacteria. It is passed down from mother to offspring.

Sloths have a slightly more varied diet and are known to eat from at least 90 different types of trees. Despite this variety, each individual sloth tends to have a very specific taste for only 7-12 individual trees – each sloth prefers a different selection! They are thought to rotate their favorite feeding trees in a cycle to prevent over-eating toxins in a singular type of leaves.

Sloths may be the slowest mammals on earth, but they’re certainly not the laziest! It’s actually a common misconception that they sleep all day when in reality they sleep for an average of 8 – 10 hours a day in the wild.

Koalas have them beat in the nap department, clocking in an impressive 18 to 22 hours of rest a day. The koala’s diet takes a lot of energy to digest so resting helps them conserve energy to do so. Sloths prefer to conserve energy expenditure with slow measured movements and unique evolutionary adaptations, instead of a high quantity of sleep.

How did both sloths and koalas adapt to live in the trees?

Sloths have adapted to life upside-down with a suite of gravity-defying characteristics. These adaptations are essential when you need to spend up to 90% of your life upside down!

For most animals, being upside down all day would cause their internal organs to press down on their lungs and diaphragm, which would affect their ability to breathe. Sloths have developed a genius solution to this problem by evolving to have organs that are bound to their ribcage with special fibrous adhesions.

Koalas also have a fascinating adaptation for life in the treetops – they have developed two opposable thumbs! This makes it much easier for them to grip onto trees and navigate from branch to branch.

Sloths hold the title as the slowest land mammals and move in a way that is very distinct to their species. At top speed, a three-fingered sloth can cover approximately 1 meter in 1.5 seconds, however, moving at this speed burns a lot of energy and so only happens in response to immediate danger.

Typically, a sloth will move upside down through the treetops at an average speed of just 3 seconds per meter. Even when threatened, the sloth’s natural reaction is to stay completely still (something Team Sloth refers to as ‘hunkering’ and is seen more in three-fingered sloths than two-fingered sloths).

Koalas have the opposite reaction and can move surprisingly fast at a speed of 10.08 kilometers per hour. They are four times faster on the ground than in trees yet are still relatively agile in the canopy. Koalas tend to move more like primates and can even be seen leaping from branch to branch.

While koalas may be faster on the ground, sloths are three times faster at swimming than they are at climbing. Swimming is a vital skill for some sloth species due to the abundance of water present in their damp habitats. Without the ability to swim, rivers would present major geographical obstacles, and falling into the water would mean certain death.

Koalas can also be seen swimming across rivers to access food sources. There is not much research published on how often they utilize this skill. It has sadly been reported that a unique issue for koalas is falling into people’s swimming pools and drowning, as while they are able to swim, they are unable to climb out.

How do sloths and koalas stay hydrated?

While the majority of their water intake comes from the leaves they eat, both sloths and koalas have been observed drinking water. On especially hot days, sloths can be seen drinking water by hanging off of vines and slurping from freshwater sources such as rivers. A new study has shown that koalas supplement their dietary water intake by licking streams of water off of tree trunks while it rains.

Who has more friends?

What dangers do they face?

Despite living on opposite sides of the world, these animals struggle with similar threats to their existence and wellbeing. Habitat loss is the number one concern for both species. As more humans move into less developed areas, animals are losing the trees that both feed and shelter them.

Some of these trees are being cleared to build roads which in turn presents another issue – both sloths and koalas are being hit by cars at incredibly high rates. While on the ground they are also in danger of dog attacks. A bacterial infection, chlamydia, is the leading cause of death in koalas. This disease is spread through sexual contact, just as it is with humans. It’s unknown why they are so susceptible to it, but it affects over 40% of the population.

Koalas and sloths share a surprising amount of similarities for two mammals that live and evolved in very different parts of the world. They are both leaf-loving, tree-living animals who are incorrectly named after bears, but we can all agree the main similarity they share is how internationally adored they are.