This month we’ve got another weird one for you as we compare the world’s tallest mammal with the world’s slowest: yes, that’s right, we bring you Sloths vs Giraffes!

They’ve both got long necks! They both make some weird noises! Let’s take a look and see what giraffes have in common with sloths… and what they don’t.

Are sloths and giraffes related?

Trick question, sloths are hardly related to anybody except anteaters and armadillos, and them only barely. Giraffes are ungulates (hoofed mammals) of the superorder Laurasiatheria, originally from the supercontinent of Laurasia, which used to be part of Gondwana. Giraffes and sloths haven’t been related to one another for about 100 million years.

It’s a common misconception that giraffes’ long necks must have more neck vertebrae than any other mammal. After all, a giraffe’s neck can easily reach 2 meters (6 ft) long! Giraffes in fact have seven cervical (neck) vertebrae, the same numbers as humans, dogs, and most mammals. The only difference is that in giraffes, the bones are stretched very long to enable the tall neck that lets the giraffes browse the tops of trees.

Giraffes’ long necks aren’t just used to reach tasty treats; they also fight with them. Male giraffes establish dominance with other males by pushing each other with their necks, and sometimes swinging and butting each other with their necks and ossicones (the short horns on top of their heads). Recent research indicates that these dominance battles may have been the original driver of the long necks, with the treetop grazing abilities being a side effect.

Sloths use their impressive claws when they need to fight, and their necks are not as proportionally long as a giraffe, but some sloths actually do have more neck bones. While most mammals (including the giraffe) have seven cervical vertebrae, two-fingered sloths have six, and three-fingered sloths have nine! Sloths’ elongated necks can rotate 270° and are useful for scanning their surroundings and keeping their heads above water while swimming. 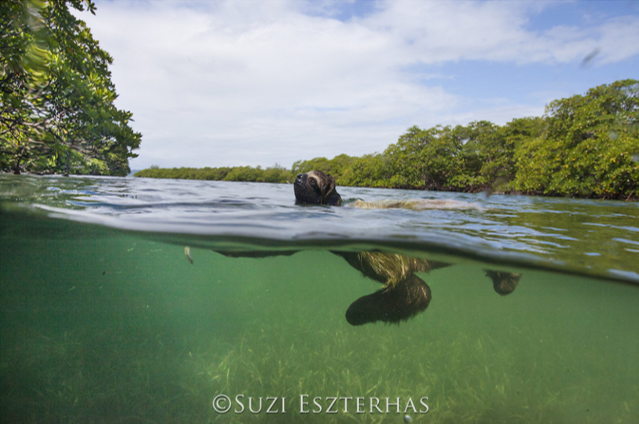 Where do they live?

What do they eat?

Sloths and giraffes are both big consumers of tree products. Sloths eat leaves, whereas giraffes eat tree leaves, twigs, and bark, and also feed on shrubs, grass, and fruit. They have occasionally been known to chew bones, which don’t grow on trees. Giraffes eat about 34 kg (75 lbs) of foliage daily.

For the first time in a while, we’ve found an animal that sleeps less than our relaxed sloth! Giraffes sleep about four and a half hours per night  – mostly standing up, they only lie down for short periods of time. They spend most of their time chewing cud.

Unlike our solitary sloths, giraffes are quite social animals. They have long-lasting fission-fusion social groups that merge and split up in complex ways, usually based on sex and family ties. It’s possible that some giraffe herds are much larger than previously thought, as giraffes can use their great height to see and monitor other herd members from quite far away. Group sizes of more than 100 individuals have been observed.

Like sloths, mother giraffes give birth to a single baby at a time and raise them without the help of the father. Unlike sloths, female giraffes may babysit each other’s offspring. Female sloths scream when in heat in order to attract males, whereas giraffes make a low humming noise that humans care barely hear, and we aren’t entirely sure why.

Do they have parasites?

Sloths have an entire ecosystem living in their fur, but most of the moths, algae, and fungi that live there have a symbiotic relationship with the sloths. Giraffes have as many as 11 chemicals in their fur that combine to repel many kinds of insects!

How do scientists study them?

Wild giraffes are recorded by ground survey methods such as mark-recapture photo surveys. Each giraffe has a unique pattern of spots, much like a human fingerprint, that is stable over time and a good way to recognize individuals. Sloths are studied exclusively by researchers in the field, as the thick jungle canopy prevents aerial observation. Both animals have different behaviors and feeding habits in captivity.

What problems do they have in common?

Like sloths and so many other wild animals, giraffes suffer from deforestation and habitat loss. Giraffes currently inhabit only 10% of their ancestral range, the other 90% has been lost to humans and habitat fragmentation. Giraffes are also hunted for bushmeat, which is sometimes sold as “beef”.

Habitat fragmentation can lead to inbreeding, though sloths may be more at risk for this than giraffes. The West African giraffe population rebounded from 49 individuals to a healthy population of over 600, proving that these are very resilient animals that only need us to give them a chance!

What is the IUCN classification?

Giraffe populations are a little easier to estimate than sloth populations, but both are declining. Sloths range from “least concern” to “critically endangered” depending on the species.  The IUCN still recognizes only one species with 9 subspecies.

The Nubian giraffe has lost 95% of its population in the last 30 years. Populations that benefit from good conservation are actually increasing, though some of these numbers may be due to better survey methods. With a current best population guess at 117,000 there are approximately half as many giraffes left on planet Earth as Ferraris.

What can be done to protect both species?

Don’t eat them, give them space, and don’t buy their bones. You probably aren’t tempted to go down to your local supermarket for a can of Sloth Soup, and if you live outside of Africa there isn’t much access to giraffe bushmeat, but you can support sustainable agriculture and initiatives to end poverty, which keeps people from being so desperate that they have to eat and exploit animals better left alone.

Tall or small, neotropical or African, black-tongued or pink, both of these amazing animals help make our world what it is. Don’t let sloths or giraffes suffer from habitat loss or face extinction! We owe it to them, and to ourselves, to keep our world rich with diversity.