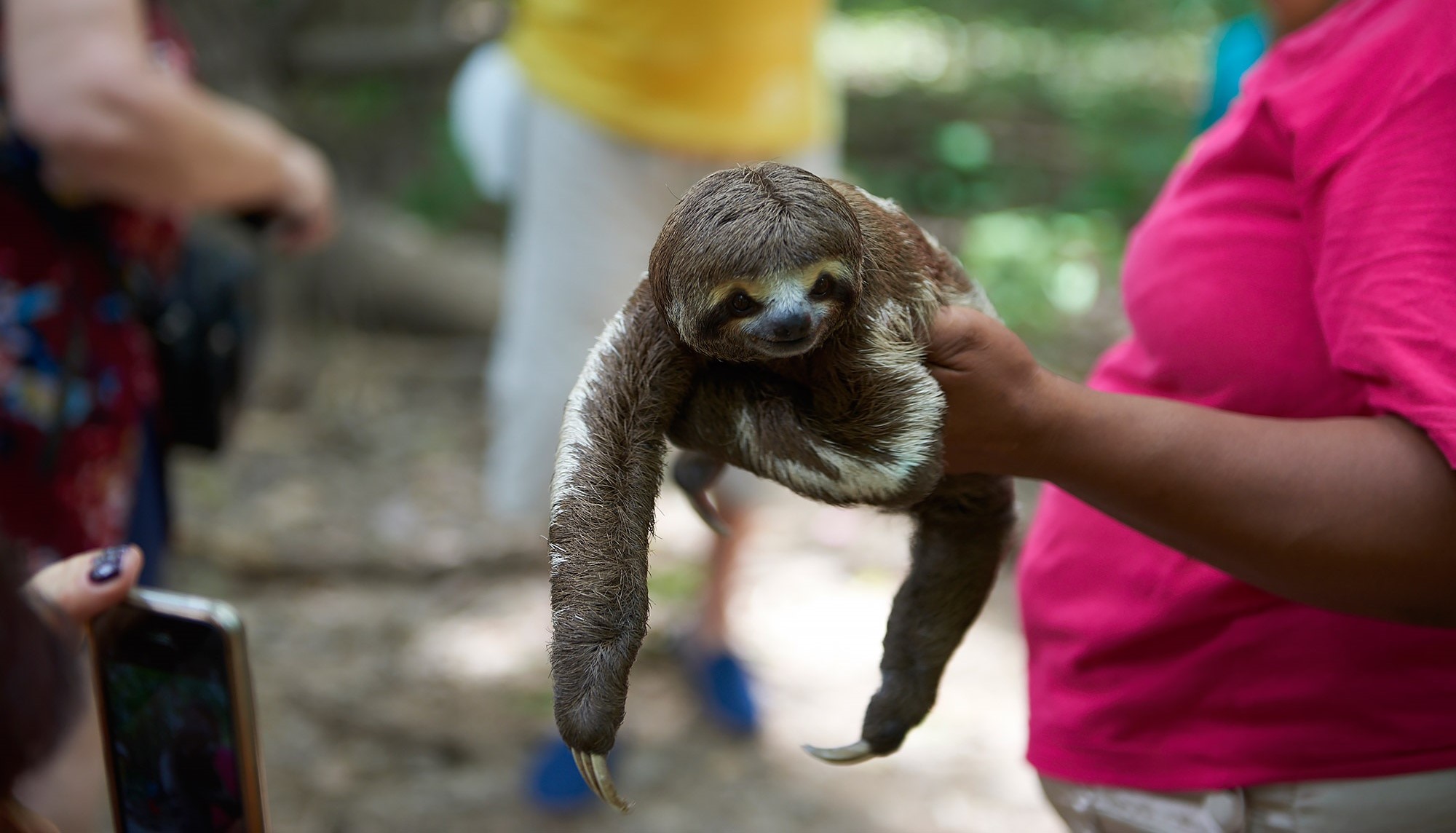 Are you thinking about booking a sloth encounter experience at a zoo or rescue center? Before you book, follow our simple guide below to make sure you don’t get tricked into supporting an organization that exploits the sloths in it’s care.

You may have already participated in our successful campaigns to end sloth yoga, sloth sleepover events and sloth swimming lessons – well now it gets worse. ‘Sips with sloths‘ and ‘after school slime with sloths‘.

This is the latest in a string of cruel and exploitative ‘encounter experiences’ being disguised as ‘enrichment’, ‘education’ or conservation. Barn Hill Preserve are unashamedly using sloths as props for their wine tasting and ‘slime making’ events. At these events paying guests are allowed to hold, pet and take selfie photographs with baby sloths.

You can help us to end this exploitation! Click here to sign our petition and demand an end to sloth wine tasting events!

Our last petition to end an event like this was a huge success – we collected over 72,000 signatures and the organisation cancelled all future sloth yoga encounters. Let’s do it again!

Why are we highlighting this?

Surely there are bigger issues for us to worry about? The reality is that most people simply do not know the dark truth behind many of these seemingly harmless sloth encounters.

There is a direct connection between the poaching of wild sloths (which is escalating at an alarming rate), and how people are being allowed to interact with sloths at ‘reputable’ organizations worldwide.

The majority of people don’t realize this link, and if they did, they certainly wouldn’t support it – and that is why we are writing this blog. We want to raise awareness and to help people make better informed and ethical decisions in the future.

We aren’t saying that ALL sloth encounters are bad – far from it. We simply want to highlight the main problems and give you an idea of what to look out for when booking one of these experiences.

Most organizations hosting hands-on sloth encounters (including Barn Hill Preserve with their sloth wine tasting events) usually justify their events by saying the sloth was rescued, they are educating people or they give money to support sloth conservation. Oh – and that the sloth enjoys the attention. Let’s take a closer look at those claims for a second and get to the root of the problem.

“The sloth was rescued…”

Rescue a sloth. Educate guests. Give money to conservation – great! Give the sloth ethical sources of enrichment to keep it mentally stimulated (as most reputable zoos do) – fantastic! There is absolutely no need to go any further than that.

Don’t force the sloth into a swimming pool, move it into a yoga studio, allow people to hold, pet and take selfie photographs with it – and then have the audacity to call it ‘education’. You can still entertain and educate guests while raising funds without putting the sloth in these stressful situations.

While we care deeply about animal welfare and all of this is very unpleasant for the individual sloth (with scientific evidence proving that all sloths experience abnormal blood pressure reactions in response to human contact due to internalized stress) there is an even bigger concern. There are dangerous knock-on consequences for sloths in the wild.

The bottom line is that hands-on encounters like this ‘normalize’ human-wildlife contact. Social media is flooded with photos of people directly interacting with wild animals.

If someone is offered the opportunity to hold a sloth then they think “well I have seen other people doing it on Instagram so it must be OK”. It isn’t OK and here is why:

Hundreds of thousands of people are now coming to countries like Costa Rica and wanting to touch or hold a sloth after seeing other people doing it on social media.

To feed the demand for hands-on sloth encounters, baby sloths are being taken away from their mothers in the wild and are exploited as tourist attractions until they die – and then they are replaced.

Sloths are now the number 1 victims of the global “wildlife selfie trade” and human exploitation is quickly becoming one of the major threats to the survival of wild sloths. If ‘reputable’ organisations are allowing people to have hands-on contact with the sloths in their care, then people won’t ever realize it is wrong.

The only way to stop this from happening to sloths in countries like Costa Rica is to kill the demand at the source. And that requires organizations like Barn Hill Preserve taking responsibility for the fact that they are setting a dangerous precedent for what is an acceptable interaction with a sloth.

Helping sloth conservation? They are doing the exact opposite. Organizations who host events like this tend to prioritize making money over protecting the welfare of the animal.

They can not claim ignorance to the sloth’s stress either – any experienced keeper working with a sloth will know that the animal is uncomfortable when being touched or handled by an unfamiliar person.

We will leave you with this:

Every single day we are witnessing first-hand the devastating impact of the demand for hands-on wildlife encounters. Just last week a sloth was being held at a banana plantation and tourists were being charged $10 to hold it. The men holding the sloth had connections with local taxi drivers who were waiting at the Limon port as a cruise ship arrived.

Hundreds of people getting off the cruise ship were wanting to see a sloth, and the taxi drivers knew exactly where to take them. That sloth was never rescued. It is either still being held today, or has died from the trauma.

We have absolutely nothing to gain from this situation. We just don’t want to see any more sloths spending their final days being used as a photo prop.

Are any sloth encounter experiences OK?

Yes! Plenty of accredited zoos and aquariums have very ethical sloth encounter experiences available. Here are the top 5 things to look out for:

What can we do to stop the exploitation?

It is easy to feel powerless, but every single one of us has an important role to play. Educate as many people as you can about these issues, and make sure that you properly research any sloth encounter before participating in it. If we all shout loud enough, we can instigate change. 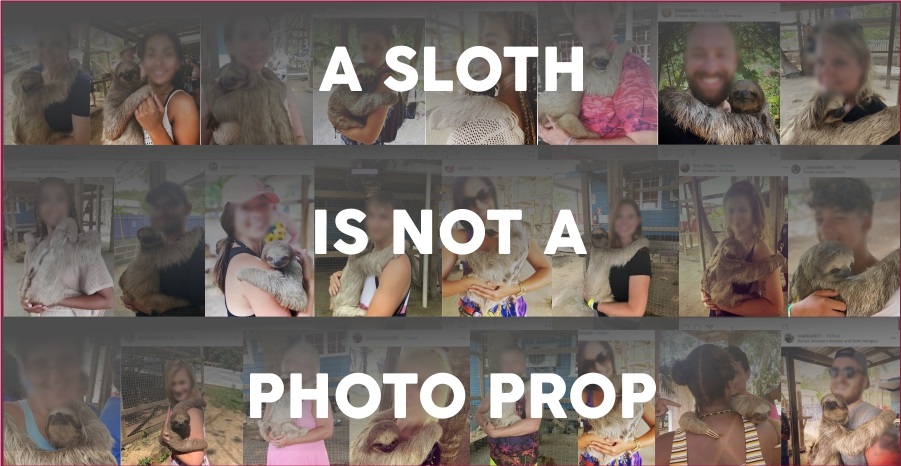