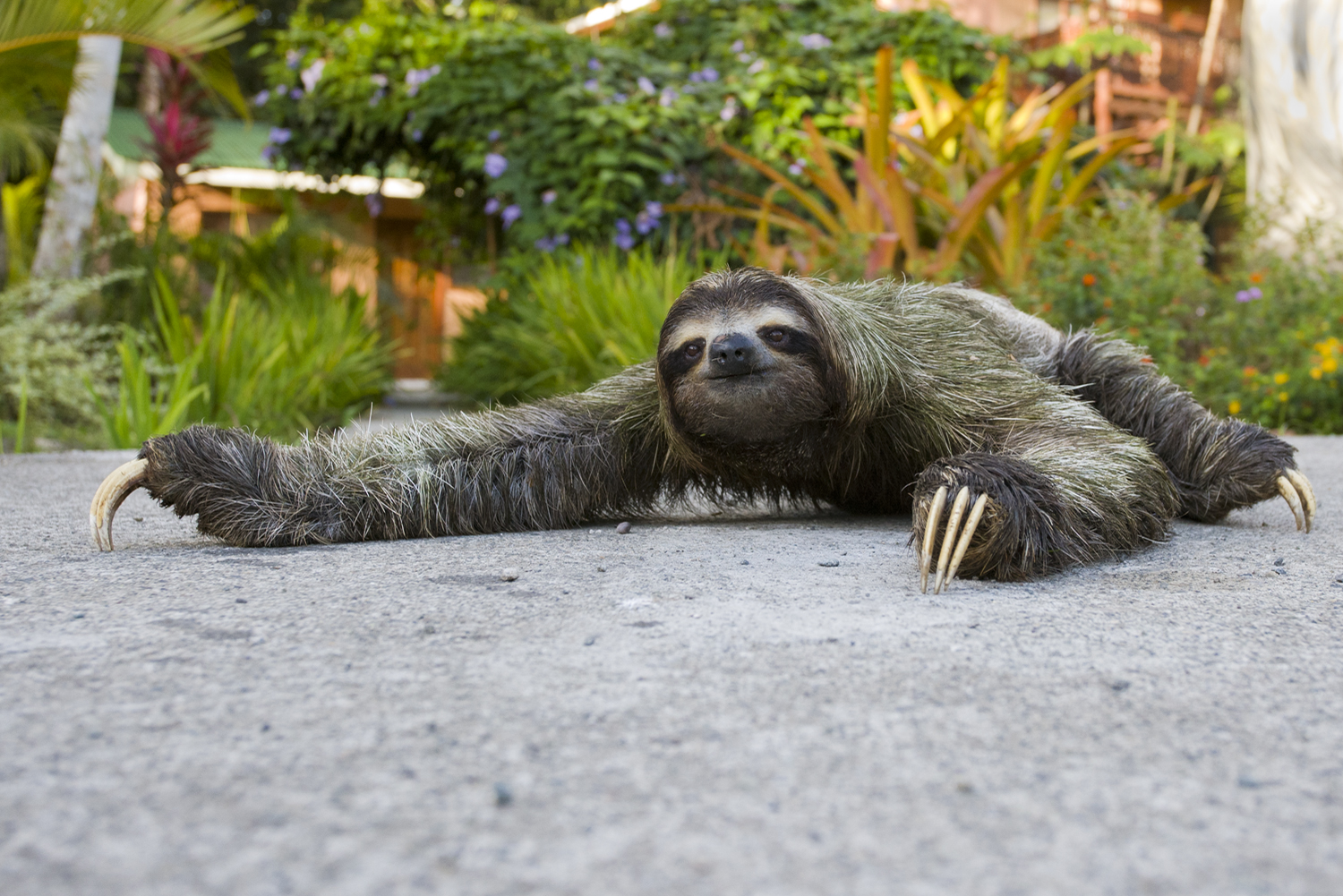 Why did the sloth cross the road?

For many species, the construction of a road slicing through the forest is an unwelcome inconvenience. Animals that can leap, such as monkeys, may be able to traverse the gap in the forest canopy without too much difficulty. However, if the gap is too large, animals are forced to descend to the ground and take their chances dodging traffic.

In this situation, being able to move fast is helpful. Unfortunately for sloths, leaping is impossible and speed is certainly not their forte. As a result, when a sloth encounters a road it is somewhat catastrophic.

Sloths are not very agile on the ground.

Their long limbs and elongated hook-like digits are adapted to support the weight of their body when hanging upside down, suspended from a tree branch for prolonged periods – a feat that almost all other animals would struggle to do. But when sloths are on the ground, their body weight pushes downwards on their limbs with gravity and they are forced to support themselves in the exact opposite way.

However, as awkward and ungainly as they may seem in this position, they are perfectly capable of walking – it just takes them a little while longer to reach their destination! Running is simply out of the question, and so when it comes to crossing a road, sloths cannot ‘dodge’ traffic.

Instead, they slowly venture out into the oncoming cars and chance their survival on drivers stopping and waiting for them to pass. This may seem like a suicide mission, and indeed it is why so many sloths fall victim to road collisions across South and Central America every day.

So why bother crossing the road in the first place?

Sloths have survived for millions of years in the undisturbed rainforest canopy. In this stable environment, they don’t need to be flexible in their behaviors. Due to their slow rate of digestion (taking 30 days to digest just one leaf) and low-calorie food choice (leaves), sloths have very little energy at their disposal.

Therefore, in order to survive in a way that minimizes energy expenditure, sloths have become the ultimate creatures of habit. Highly specific home-ranges and preferences for particular ‘modal’ trees are passed on from mother to infant, and a sloth will maintain this preference for the rest of its life.

They know exactly which trees to feed on to acquire essential nutrients (while avoiding over-consumption of toxins) and they have no need to modify this pattern. Therefore, if a road is suddenly built which divides their home-range in half, a sloth will have no choice but to descend from the safety of the canopy and make the treacherous journey to the other side.

Sadly, it is not just the traffic that poses a threat to sloths in this situation. Poorly-insulated power lines are strung along every road in Costa Rica and electrocutions are one of the leading causes of sloth mortalities.

Concrete drainage ditches that run alongside many roads are death traps for wildlife, and when on the ground in an urban environment, sloths have no way to defend themselves and are vulnerable to attacks from both dogs and humans.

What can we do to help?

Several organizations are working to construct wildlife canopy bridges across major roads which are successful in facilitating the movements of numerous species. Although sloths have been known to utilize these bridges, they do not have the energetic flexibility to travel long distances to find a crossing.

If there is no canopy bridge in the immediate area where they need to travel, they will continue to cross the road on the ground. We need to ensure there are frequent bridges lining busy roads and that natural canopy crossings are maintained wherever possible.

Power lines need to be better insulated, or in an ideal world, moved underground. But most importantly, we need to respect the remaining forest and try to minimize any further disturbance to the sloths’ existing habitat. This will not be easy – with the human population increasing at an exponential rate we are never going to stop encroaching on the rainforest.

But perhaps we need to start compromising. If we want to see the survival of wildlife, we can no longer simply bulldoze everything in our path to make way for towns, farms, and cities. We need to protect key areas, consider the habitat requirements of species and make sure that we conserve the essential components. We need to learn how to co-exist.