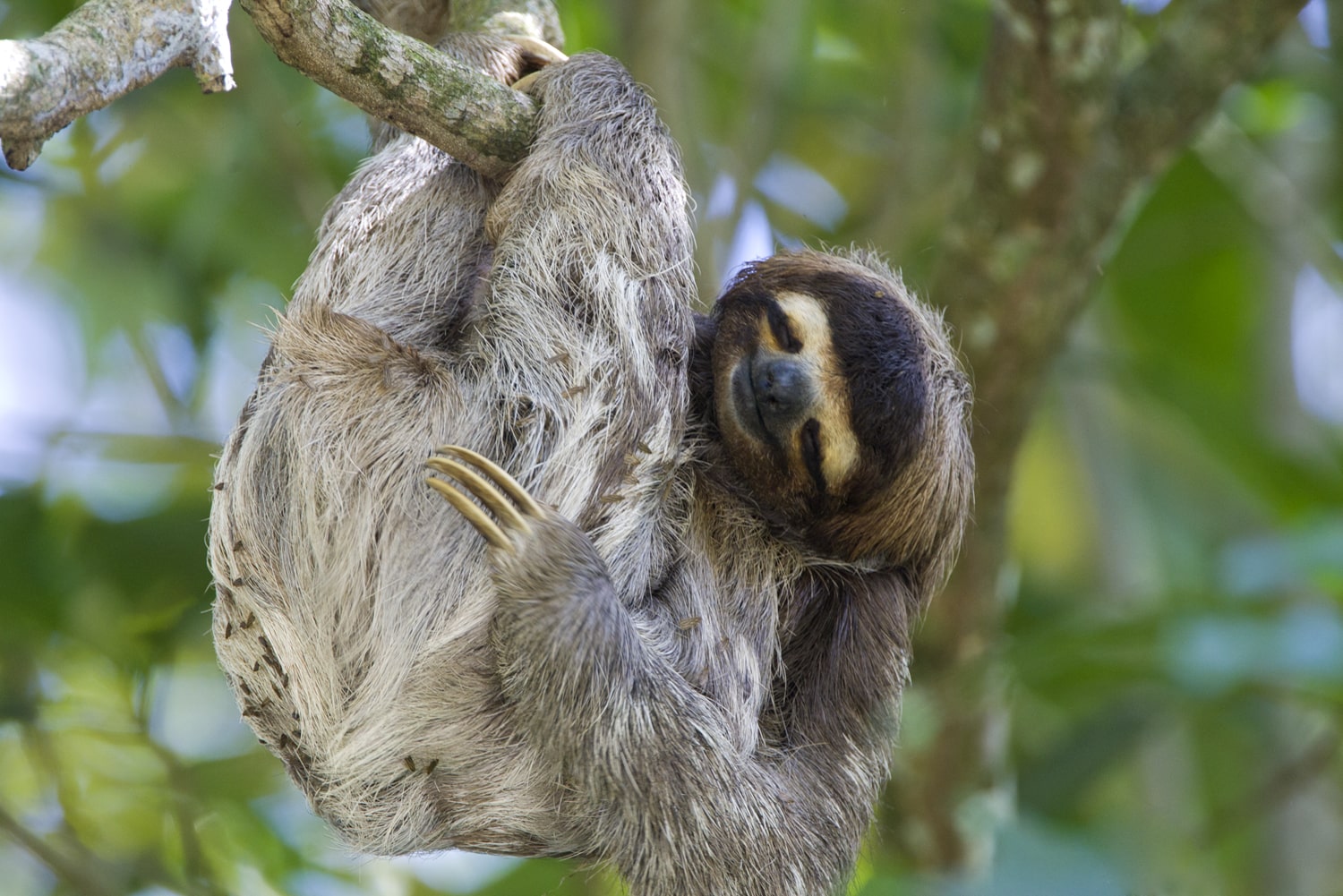 Although there are tons of sloth myths on the internet coming from self-appointed sloth experts, there are actually very few scientific studies that have been done on sloths. It´s very hard to study sloths in their natural habitat (the dense primary rainforest) because they live high up in the trees and they are so well camouflaged. Their enigmatic nature may be the reason why people have come up with some bizarre myths about them! Here are some of the most common myths about sloths (including some of our favorites).

Sloth myth 1- Sloths are so dumb they mistake their own arms for tree branches.

We don’t know exactly where Douglas Adams got this information from when writing “The Hitchhikers Guide to the Galaxy” but it is unfortunate and completely wrong. Sloths are actually very careful when they move about in the trees. Before they move, they need to be sure that the branch they are holding onto is strong enough to carry their weight. Also, their grip is incredibly strong (stronger than any human), and so they would probably notice if they grabbed onto their own arm! Sloths may not have big brains, but they are certainly not that slow-witted!

Our beloved sloths are actually something called Xenarthrans – a very ancient super-order of mammals that includes all of the modern sloths, as well as anteaters and armadillos.

Maybe some people think that sloths are primates because, like monkeys, they live in the trees. Or perhaps that they are marsupials because they are similar in nature to koalas. In Spanish, the name for sloth is “oso perezoso”, which can be translated as “sloth bear” or “lazy bear”.  Common names can be confusing, which is why scientific names are so helpful! As it turns out, there is actually something called a “sloth bear” (Melursus ursinus) and it has absolutely nothing to do with sloths. Sloth bears are true bears that live in India, Sri Lanka and Nepal.

When these bears were first described in the scientific literature by George Shaw in 1971, they were mistakenly believed to be related to the tree sloths of South and Central America – and consequently, they were given the name ‘sloth bear’. Time and additional specimens eventually revealed their true taxonomic relationships, but the confusing common name remains.

A sloth mom will carry her baby around on her chest for an entire year. A baby sloth is strong enough to cling onto mom’s fur from the moment they are born, but sometimes they fall from the canopy (all baby animals are a bit clumsy and sloths are no exception). When this happens, mom will slowly climb all of the way down to the forest floor to retrieve her baby.

While the baby is on the ground, it will cry out to attract the mom’s attention. This loud cry also attracts the attention of nearby humans, and they often assume that the baby has been abandoned. This gives sloth moms a bad reputation – they don’t realize that mom is hiding up in the canopy, waiting for everyone to go away so that she can climb down safely.

With all of the best intentions, people bring hundreds of baby sloths into rescue centers every year – and in a lot of cases, they have been unnecessarily rescued by accident! Sloth moms are actually fantastic moms. If she feels threatened, she will do everything in her power to protect her baby. She will even use her own body as a shield if they are being attacked to prevent any harm from coming to her baby.

This is a common complaint about many different species, and a lot of wild animals do raid crops – but we shouldn’t expect anything else when we are using the habitats of these animals for agriculture!

Sloths, however, are definitely not crop raiders. Firstly, it takes a sloth 30 days to digest a leaf and so they really have no interest in gobbling down mountains of food. They also eat the leaves of up to 90 species of trees in the rainforest, but they don’t have any interest in human crops at all (these foods are not part of their diet).

Despite being loved by people all over the world, a lot of people that grow up in close proximity to sloths think that they are gross and dirty. Having fur that is covered in green algae and filled with hundreds of invertebrates definitely doesn’t look clean. However, some species of fungi living in the fur of sloths may hold the key to curing cancer in humans!

Sloths can not sweat (except the tip of the nose for two-fingered sloths) and so, unlike humans, they have no body odor. Sloths actually smell just like the jungle: fresh, green, and a little bit earthy. Smelling like the rainforest is a great way to hide from predators with a keen sense of smell. Sloths are the masters of jungle camouflage!

Among many local people in Costa Rica, there is a strong misconception that sloths carry the feared “papalomoyo”, a disease commonly known as Leishmaniasis. This disease is actually caused by a protozoan flesh-eating parasite called ‘Leishmania’. If it sounds nasty, it is. SloCo founder Dr. Rebecca Cliffe contracted this disease several years ago while walking her dog on the beach (you can read about her painful treatment here).

Sloths are, in scientific terms, a ‘reservoir’ for leishmania, but so are many other mammals – including dogs! There is no way a sloth can transmit leishmaniasis to a human – this only happens through the bite of an infected sandfly.

Sloth myth 7 – Sloths are slow because they are intoxicated

No, sloths are not “stoned” on leaves! And the fermentation process that occurs in the stomach doesn’t render them drunk either. There are several different factors underlying the sloths’ slowness: poor vision, predator avoidance, a low-calorie diet, specialized muscle fibers, a slow rate of digestion, and low metabolic rate. We explain all of these reasons in depth in this article!

Sloths don’t actually sleep that much at all – research has shown that on average, wild sloths only sleep for 8-10 hours a day. In comparison, the similarly sized howler monkey sleeps for 15 hours a day, while koalas will regularly clock up 20 hours!

Sloths in zoos, sanctuaries and rescue centers might sleep a lot more than their wild counterparts due to the ease of captivity, but this certainly doesn’t apply to life in the jungle.

While it is true that they only defecate once a week, and that their four-chambered stomachs are full of fermentation gases, we can confirm that they don’t explode, even if they get constipated.

Sloth myth 10 – The biggest myth of all: sloths are lazy

“The lowest form of existence …one more defect and they could not have existed.” This glowing report is how sloths officially entered the scientific literature back in the 18th century by Georges-Louis Leclerc, Comte de Buffon (or ‘buffoon’ as we prefer to call him). Sloths were named after the deadly sin of being “slothful”, and they were unceremoniously given the title of being the world’s laziest animal. That is a hard reputation to bounce back from!

However, as we have already described above, sloths don’t actually sleep that much. They are slow and careful – which has tricked scientists into wrongly believing that they just sleep all day. Being slow is far from lazy. It is an unbelievably successful survival strategy!

Bonus myth: sloths have giant snakes as pets that protect them from predators

Seriously – this is a real myth. Of course, this isn’t true, but we got inspired to imagine how it might look…