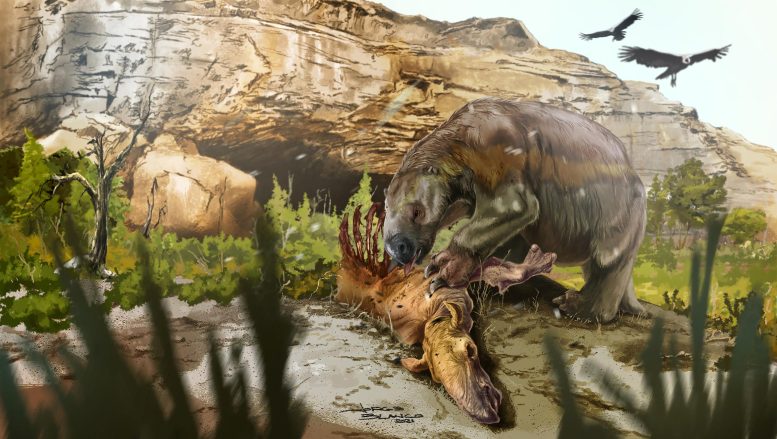 Sloths these days are small, tree-dwelling animals that live high up in the rainforest canopy and do a good imitation of the plants they eat. They’re slow, they’re green, and they can’t jump—but a new study published in the journal Scientific Reports suggests their ancestors weren’t the strict vegetarians their reputation would have us believe.

Once upon a time

In the ancient Pleistocene sloths made up a large part of the South American ecosystem. Sometimes literally large: the giant ground sloth Mylodon darwinii was three to four meters (over 10 feet) long and weighed up to two tonnes (about 4,400 lbs).

Based on fossil records of its teeth and current sloth dietary habits, Mylodon was assumed to be an herbivore—although scientists often wondered how the gut-to-body weight ratio of this giant ground sloth supported a strictly vegetarian diet.

Paleoecology is a difficult field to study. Scientists have to use indirect evidence of bones and fossils to extrapolate things like diet and behavior, and the giant ground sloths lack the sharp teeth and claws that most modern carnivores use to capture and kill prey.

This is where a relatively new technique called “amino acid compound-specific isotope analysis” comes in: this is a measurement of certain nitrogen isotopes found in hair, nails, and some parts of the bones and teeth, and can tell us where the animal in question got its dietary amino-acids from. This analysis can differentiate between amino acids based in plants or animals, and even tell if the diet was primarily seafood or land-based meat.

Comparing samples from modern animals, including sloths, anteaters (which are related to sloths), and a range of omnivores, researchers from the American Museum of Natural History have determined that Mylodon was in fact also an omnivore.

How to be an omnivore giant sloth

This immediately begs the question of: how? After all, the number of animals that can out-run a modern sloth are basically all of them, and ancient ground sloths do not show signs of being speedy creatures. The speculation is that the giant Mylodon might have foraged for bird eggs or scavenged meat from animals killed by other predators—after all, it doesn’t take an impressive turn of speed to hunt down a corpse.

Not all giant ground sloths turned their teeth to meat-eating; like all modern sloths, Mylodon’s North American cousin Nothrotheriops shastensis was purely herbivorous.

Humanity’s ancient ancestors certainly fed upon the giant ground sloths, and it is interesting to think that some of them might have occasionally returned the favor. Luckily for modern humans, we are safe from the small two- and three-fingered sloths of today, and they would surely be happy to be kept safe from us as well.