June on our Social Media

In this picture you can see our Connected Gardens Project manager, Patricio, riding his bike to deliver some tree saplings. Unless is strictly necessary, whether it´s because the place to plant is too far, or requires a big quantity of trees, We always choose our bikes as our principal way of transportation.

Have you ever thought about sloths taking to the oceans?

Well in the turquoise waters off the coast of Panama, a group of island living pygmy three-toed sloths (Bradypus pygmaeus) have found an alternative, and quicker, mode of transportation: Swimming!

Dr Rebecca Cliffe our founder and sloth biologist explains that “their diet of leaves leads to the generation of gas during digestion, which means they’re like big balls of air”. Which makes they are relatively buoyant and makes swimming easy. And in fact, they can swim three times faster than they can move through the trees!

Today is the World Day to Combat Desertification and Drought! You might be thinking, how does this affect sloths? The tropical rainforest ecosystem where sloths live is drying up. The Caribbean side of Costa Rica is known for its rain. However, even here, we have been experiencing water shortages. Some regions of the country received 75% less rainfall than expected in July 2019, leading the country to declare a state of emergency.

Sloths are unlike many other mammals because they are unable to regulate their own body temperature. This means that everything they do is dependent upon the weather. Of particular concern right now in Costa Rica is the lack of rainfall. Sloths are being admitted into rescue centers all over South and Central America suffering from dehydration, and we are seeing a big increase in the number of sloths drinking from rivers.

What is the real cost of that $3 pineapple? Today is sustainable gastronomy day we want to highlight how this popular and delicious fruit is impacting the lives of people, sloths and the rainforest

Did you know that Costa Rica uses more pesticides (per capita) than any other country in the world? These pesticides contaminate the whole rainforest ecosystem, and the result is now being observed as genetic abnormalities in sloths and monkeys

When it comes to being a good dad, sloths are quite frankly not the greatest role models and they certainly won’t be winning any ‘fabulous father’ awards any time soon.

After mating, a male sloth will quickly return to his peaceful, solitary existence. After an 11.5 month pregnancy (longer than in humans) a female sloth will give birth to her baby whilst hanging upside down from a tree branch. She will then spend a full year carefully raising that baby alone, overcoming a 1-in-3 chance of infant mortality before it reaches independence! All the while, the baby sloth’s father will likely be snoozing in the shade….

We hope all human and animal fathers enjoy their day today! We hope you get to snooze in a shaded tree all day undisturbed 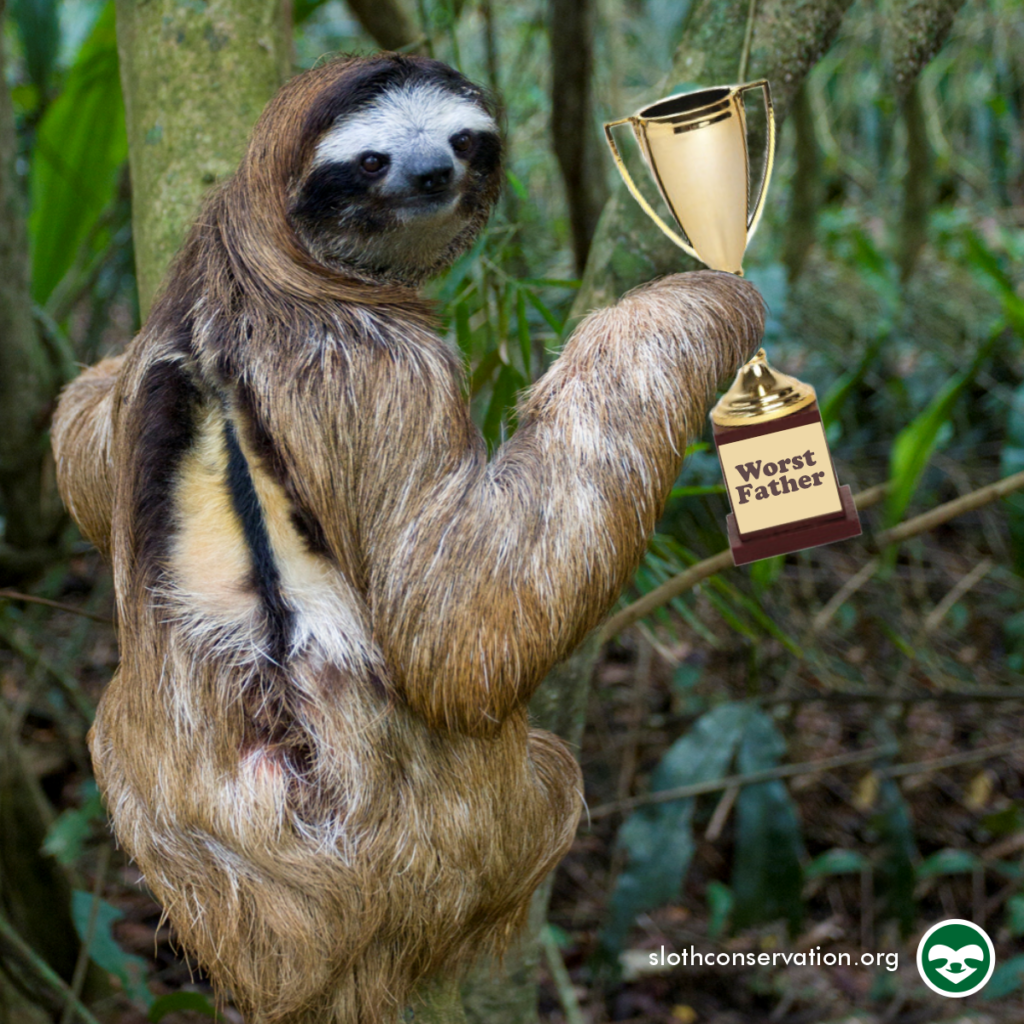 #worldselfieday Would you like to have your photograph taken with a sloth? A sloth selfie for social media? When considering a sloth encounter, the most important thing to remember is the slogan of the year: SOCIAL DISTANCING!

We have put a blog post together highlighting the ultimate sloth selfie code:
1.) Never pay to hold or pet a sloth!
2.)Social distancing and no touching!
3.) Don’t use your flash!
4.) Keep your selfie stick to yourself!
5.) Don’t bait the sloth with food!
6.) Don’t shout or disturb the sloth with loud noises!
7.) Be a sloth hero and stop sloth harassment!

#worldrainforestday Rainforests are vital for the survival of life on Earth, without rainforest there would be no sloths!! We depend on the Amazon rainforest alone for 20% of the oxygen we breathe and the freshwater we drink. They absorb our carbon dioxide, stabilize climate patterns, and are home to half the world’s plant and animal species.

Yet every minute, we lose 40 football fields of rainforests, which is a major threat on our biodiversity! Scientists estimate there to be 5-10 million species that live on this planet. We have only recorded 1.3 million of them. It is possible that 90% of the lifeforms on this Earth have yet to be noticed and appreciated by us. Protecting and restoring our rainforests could reverse global emissions by a third!!

June is pride month! Not only are we devoted to protecting sloths and the environment here at SloCo but we also advocate for respect and inclusion of all people to create a better future!

Embrace pride with us!
#loveislove

The tropics are one of the areas experiencing the impacts of climate change most severely, appearing especially sensitive to increasing temperatures and unpredictable weather. This in turn is affecting sloths enormously as they can’t regulate their own body temperature like other mammals, and therefore dramatic changes in ambient temperature for sloths can be fatal!

Tropical forests play an important role in global climate change, providing the essential service of carbon sequestration, storing approximately 25% of the world’s carbon. However, the rate of deforestation within tropical nations is severe. Deforestation, along with land use change in the tropics is contributing up to 20% of global carbon emissions.

What can we do to help? Our projects are located in the tropics and, while working towards the conservation of sloths, we are dedicated to protecting the environment and reducing our carbon footprint as much as possible. Our Connected Gardens project focuses directly on reforesting and restoring sloth habitats, fighting the elevating rates of deforestation. Why don’t you consider donating to our Connected Gardens project today and plant some trees, leaving the kind of footprints we should be leaving on this earth