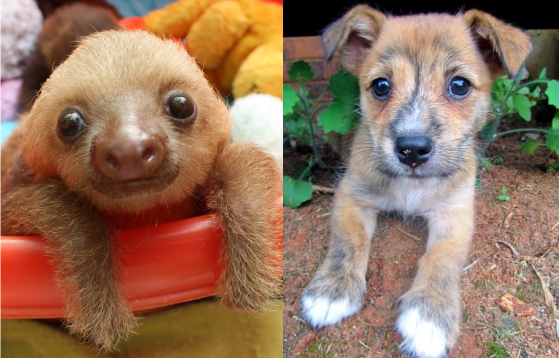 What do these two have in common?

You might find them both featured in baby animal calendars or filling the feeds of animal aficionados. But the lives of these two animals are entangled not just because of their comparable cuteness.

When their bite is worse than their bark

Over 180 different species of wild animals are now threatened by dogs and at least 11 are now extinct because of  our canine companions. After cats and rats, domestic dogs have become the third-most-damaging mammals – and yet this fact has received almost no media attention. Domestic dogs include feral and free-ranging animals, as well as those that are cared for by humans as pets.

Predation is the biggest threat posed by domestic dogs to wildlife, followed by the transmission of diseases, competition, and hybridization. The regions most affected by these issues are South-East Asia, Central America, the Caribbean, South America, Asia, and Australia.

A big problem for sloths

Dog attacks are now the second leading cause of death to sloths in Costa Rica. Rescue centers receive 2 to 3 wild animals per week that have been injured by dogs or cats.

The chances of a sloth encountering a dog are high due to the sheer number of dogs roaming around and the fact that human development is breaking up the sloths habitat. Since sloths can’t jump, they often resort to crawling on the ground to travel between trees in urban areas. A sloth on the ground has no way to defend itself against a dog. If the sloth somehow survives the initial attack, secondary infections from the bite wounds often prove to be fatal.

Incorrect beliefs about the castration and sterilization of animals, coupled with irresponsible ownership and abandonment, has lead to a large number of stray and feral dogs roaming the streets.

This is a bad scenario as a single female can produce 4 to 5 puppies per litter, twice a year.  A lot of people think that all dogs should have puppies because “it makes them happy” or “if they don’t experience motherhood they’ll be sad”. Other pet owners don’t want to sterilize their male dogs because this might “affect the dog’s virility”, despite the proven benefits of neutering them.

The ‘Oh My Dog’ project is a new initiative that we launched in 2019 which aims to reduce the number of dog attacks on wildlife in Costa Rica. This project has a three-pronged approach:

In a world where humans and their pets reach every corner of the planet, achieving harmonious coexistence with nature is a fundamental task for conservation.

So, if you love sloths and you love dogs, please consider helping us with this campaign. It’s a win-win for dogs and sloths!