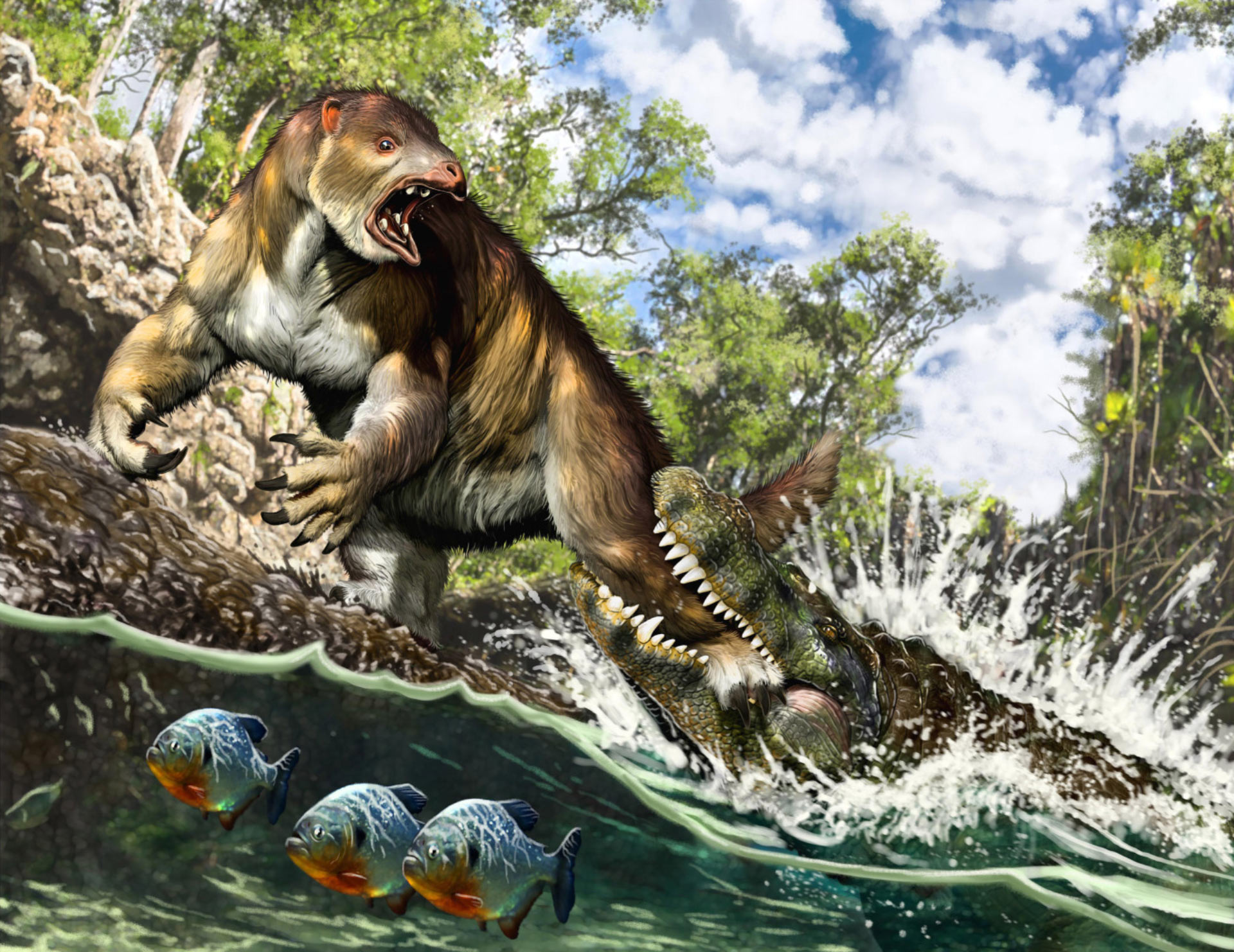 Being a giant sloth in an ancient wetland

Thirteen million years ago, when giant ground sloths roamed the Earth, a vast wetland known as the Pebas Mega-Wetland System extended across northernwestern South America. This network of rivers and swamps was home to a variety of large fauna: caimans and crocodiles over 10m in length, turtles 3.5m in diameter, rodents the size of buffalos, and of course giant ground sloths!

Paleontologists believe that these giant crocodilians preyed upon the ground sloths. However, evidence of a stand-off between these ancient giants is extremely rare, making a recent discovery of the remains of ground sloth in the Peruvian Amazon even more remarkable!

Searching for clues from the past

Paleontologists recently found compelling evidence of this predator-prey relationship, when they revealed an incredible specimen: the tibia of the giant ground sloth (Pseudoprepotherium) covered with 46 large teeth marks. Given the shape and size of the punctures, which were much too large for the other crocodilian species living in the area, scientists concluded that the attacker was a juvenile or sub-adult giant caiman (Purussaurus). Even as a juvenile, the giant caiman was estimated to be a whopping 4 meters (13 feet) long!

The pattern of bite marks suggests that the caiman attacked the sloth’s hind limb from below – much like their modern-day descendants do today.

The importance of wetlands to modern-day sloths

Although modern-day sloths have taken to the trees, wetlands still play an important role in their lives. From swamps to mangrove forests, these watery ecosystems are rich habitats for sloths. Low-lying marshy areas in Costa Rica are often filled with sangrillo trees – one of the sloth’s favorite trees that we grow in our forest nursery. The name “sangrillo” comes from the Spanish word “sangre” which means blood, because the sap of the tree is a dark red color.

Ancient ground sloths had the ability to stand on their hind feet, towering at an impressive 12 feet tall. Lacking this ability, how do modern tree-dwelling sloths navigate wetlands? Well, as it turns out, sloths are remarkably good swimmers, moving 3x as fast in water than on land.

Moreover, since these soggy areas are difficult to develop and prone to flooding, they are often the last refuges left for sloths and other types of vulnerable wildlife.

The importance of wetlands to humanity

Swamps, marshes, mangroves, mudflats, lagoons, peatlands, bogs are all ecosystems that fall under the umbrella of what constitutes a wetland. A wetland is any area of land where water covers the ground, temporarily or at all times of the year. Many wetlands have the undeserved reputation of being smelly, inaccessible places that provide little to humanity.

Wetlands provide food and shelter to a vast array of species, including us. They protect our coasts from the buffering of waves, reduce the severity of floods, absorb pollution, and purify our water resources. They are essential to the health of our fisheries, serving as “nurseries” for many types of fish that feed our coastal communities. In addition to fish, wetlands provide rice for 3.5 billion people globally.

Wetlands are also important allies in our fight against climate change, with mangroves and sea grasses absorbing 40-50x more carbon than other terrestrial forests.

In addition to the life-giving resources they provide, wetlands sustain our economy. More than a billion people depend on wetlands for income. Moreover, the services they provide for free would cost US $47 trillion a year –  making them the most valuable type of ecosystem.

Given how underappreciated wetlands are for all the gifts they bestow, it is understandable why many people find it so tempting to fill them. However, the ecological functions that wetlands provide disappear with the rising land. And inevitably the water will return, flooding the buildings and towns that were built upon the muddy ground.

Appreciating wetlands means recognizing all the services that they provide for us and the many unique creatures that live there. Globally, 40% of Earth’s species live and reproduce in wetlands and 25% of all species live in coral reefs. Every year, 200 new species of fish are discovered in freshwater wetlands. Conserving wetlands means ensuring a healthy future for these species (and us) for many generations to come.