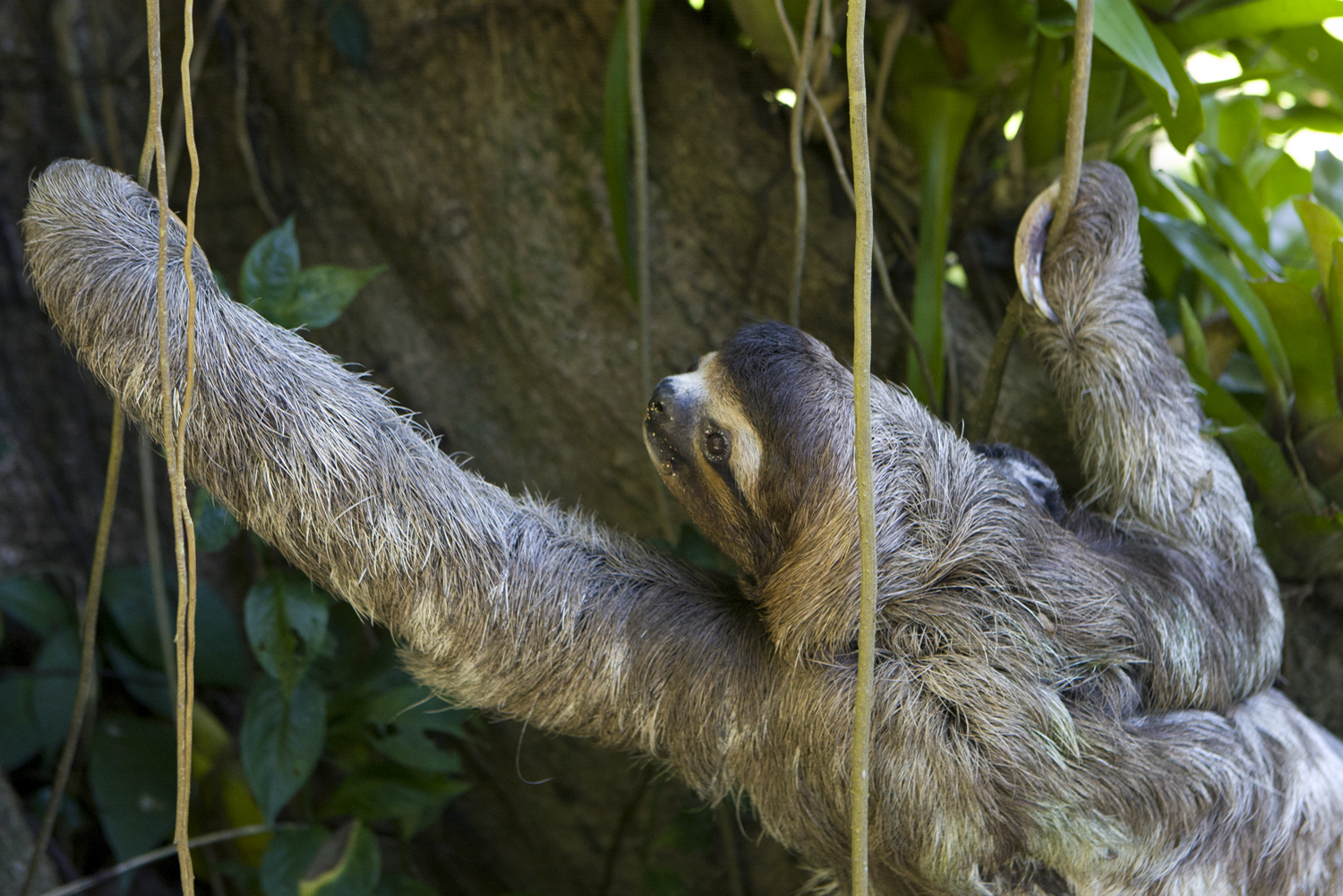 Is Costa Rica really the best place in the world to see sloths?

If you want to see sloths in the wild, a quick google search will definitively point you in the direction of Costa Rica. With its abundance of wildlife (boasting 5% of the world’s biodiversity), assorted ecosystems (ranging from the cool montane cloud forests to the humid tropical lowland rainforests), and a relatively well-developed infrastructure, approximately two million tourists flock to this tiny Central American country every year.

And for good reason; you are almost guaranteed to see a sloth. But these animals are found in numerous countries throughout South and Central America – so what makes Costa Rica different? Why does this little country appear to have so many sloths? And why are they so easy to see? The truth is perhaps surprising.

Sloths are perfectly adapted for life high up in the canopy of  ‘primary’ rainforests.

Primary rainforests are defined as those forests that are in pristine condition, having never been disturbed by humans. They typically have very tall trees (that can reach over 250 feet in height) forming an upper canopy, followed by several layers of understory canopy.

In this environment, the trees all connect and so the sloths can travel easily throughout their home-range without having to come down to the ground very often. Sloths have thrived in this continuous and undisturbed habitat for over 64 million years, and they are continuing to thrive in regions where this ecosystem remains.

Costa Rica does not have an unusually high sloth population.

In fact, experts predict that sloth numbers in Costa Rica are falling rapidly. While there is no official population count (for scientists to count an animal, it must first be seen – something which sloths are very good at avoiding), rescue centers across the country are receiving sloths at an alarmingly fast rate.

Sloths are incredibly slow to reproduce, having only one baby every 3 years and facing a natural mortality rate in infants of approximately 60%. Consequently, the sloths are being wiped out faster than they can reproduce.

The simple reason for this is that Costa Rica does not have enough healthy forest left – particularly primary rainforest – for the sloths to inhabit. In fact, as of 2005, only 3.5% of the country was covered by primary rainforest (compared to an average of 40-50% for other South and Central American countries). This is astonishing.

Since the 1960s Costa Rica’s primary forests have been wiped out for agriculture and cattle ranching (not helped by the United States offering Costa Rican farmers millions of dollars in loans to produce beef). In the 1990’s Costa Rica had one of the worst deforestation rates in the entire world, with only 26% of the country having any sort of tree cover left.

Realizing the detrimental effect that this was having on ecosystems and wildlife, the Costa Rican government implemented some impressively rigorous conservation strategies to protect the remaining forests.

As a result of these efforts, Costa Rica is now the only tropical country in the world that has managed to actually stop and reverse deforestation – the amount of forested land is increasing year by year, albeit very slowly. While this is certainly beneficial, the loss of the ancient primary forests can never be reversed, and it is the true primary forest that the sloths need in order to thrive.

But why, then, are sloths so easily seen in Costa Rica?

Sloths inhabiting their preferred habitat – primary rainforests – will be very difficult to spot. In this environment, sloths are perfectly camouflaged and become invisible hiding in the dense foliage at the top of gigantic trees. But in Costa Rica, the sloths don’t have this option.

They are being forced to exist in increasingly urbanized environments, and here they cannot hide! While Costa Rica may appear to be a green and eco-friendly country, on the whole, the secondary growth forest that covers much of the land is sparse and fragmented in comparison to the dense vegetation found in the primary rainforests.

If you look closely at the tree cover in many regions, you will notice that the trees rarely connect or overlap at the top. This is manageable for species such as monkeys that can traverse gaps by jumping, but it is detrimental to sloths that are forced to descend to the floor and crawl across the ground. As a result, while attempting to navigate these disturbed areas, the sloths are very easily seen while crossing on the ground or hanging from a power line or isolated tree at the side of the road.

The other side of  ‘Sloth Tourism’

Furthermore, as travel becomes more accessible and increasing numbers of tourists flock to Costa Rica because of its notorious sloth viewing, the infrastructure is being developed to meet the demand. For example, roads that were once pot-hole riddled dirt tracks have been transformed into 80 km/h highways, and the government is expanding the only major highway that links the Caribbean coast to the capital city (route 32) which creates a 50-meter gap between the trees on either side of the road.

When considering the speed at which development is occurring, it hardly seems surprising that sloths are being attacked by dogs, poached / harassed by humans, run over by cars, and electrocuted on the power lines in record numbers.

This equally explains why Costa Rica also has more wildlife rescue centers per square mile than any other country in Central or South American. All of the wildlife is struggling, but the sloths are facing a particularly vulnerable future.

So what can we do about it?

Sadly, there is no way to replace the lost primary rainforest, and the knock-on consequences for wildlife are going to be seen for the foreseeable future. However, the negative impacts are certainly being minimized by the implementation of rigorous conservation policies by the government.

When faced with a booming population and tourism industry exerting pressure on the infrastructure, managing to maintain a reverse in the levels of deforestation is an impressive feat. However, there are also things that we can all do on an individual level to help. For example: