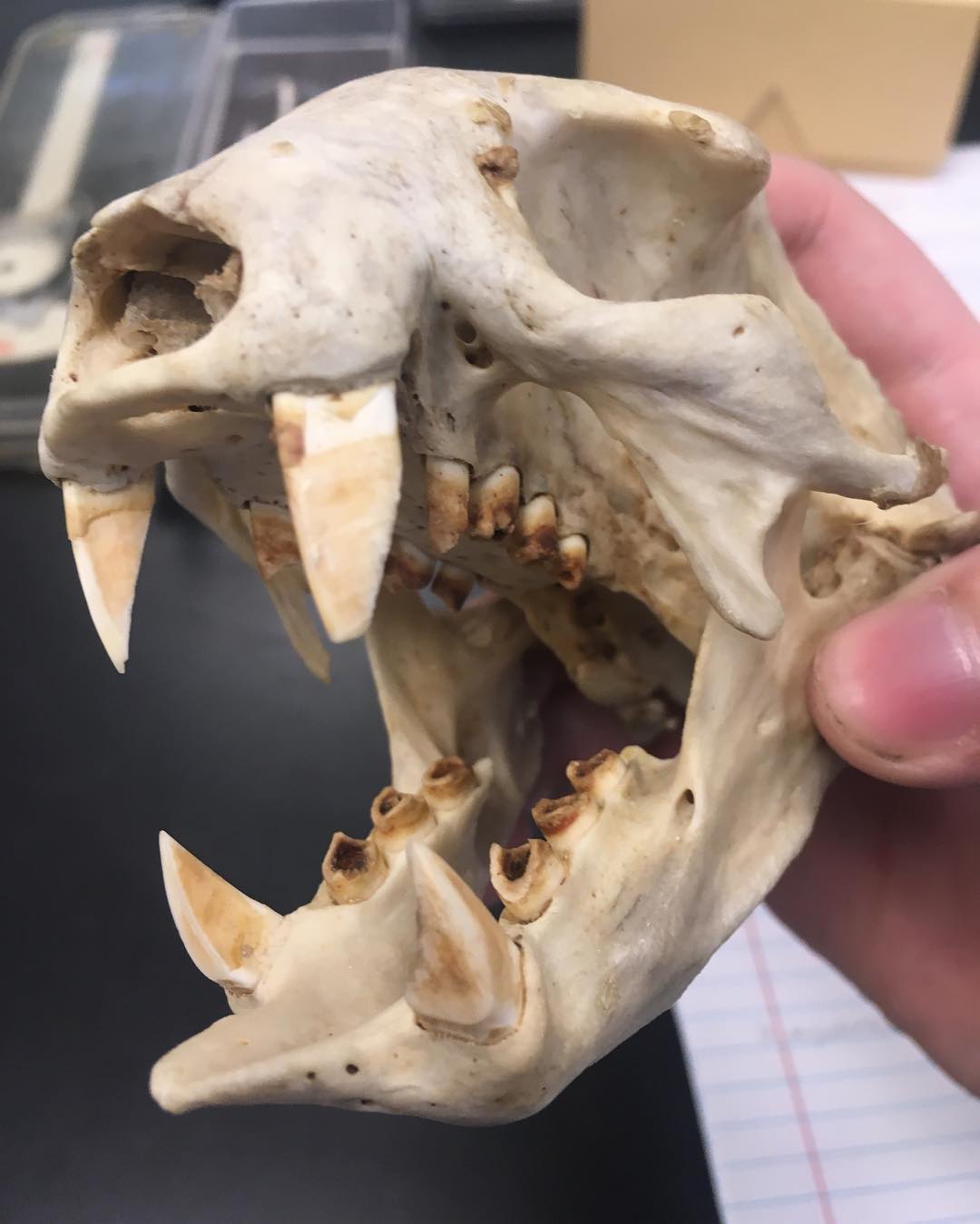 What is the skeleton of a Sloth like? What are their claws made of? The internet is full of ‘facts’ about sloths. You will be surprised to know how much of this information is untrue.

For example, many people believe that the leading cause of death in sloths is when they fall out of the tree after mistaking their own arms for tree branches. This ‘fact’ was actually invented in the book ‘A Hitchhikers Guide to the Galaxy’ and is definitely not true. Because so little is known about sloths (and much of what we do know is admittedly bizarre), people are eager to believe whatever nonsense they hear or read on the internet

Here we bring you eight surprising things that you (probably) didn’t know about sloths!

1- Do sloths have nails? Or are their claws made of bone?

Well, it’s somewhere in between. While sloth claws look like overgrown nails, they are actually formed by elongated and curved distal phalange bones protruding from their limbs. These bones are covered by a sheath of the same material that makes up our fingernails and hair (keratin).

Sloth claws achieve their shape and sharpness by constant use climbing trees. If they get broken or damaged, sloths can actually regrow their claws thanks to their low metabolic rate (in a similar way to when reptiles regrow their limbs). However, the claws will rarely regain their original shape, often growing back deformed. In the wild, this can put the sloth at a great disadvantage as their claws are vital for life in the canopy.

In captivity sloths often have overgrown claws which curl painfully into the pads of their hands and feet, making climbing and feeding difficult. In these cases, the underlying bone is the same size, but the fingernail sheath is overgrowing because it isn’t being worn down by climbing as frequently or as intensely as their wild counterparts. Overgrown claws are much easier to break, and this is why sloths living in captivity often have damaged or deformed claws!

2- There is a Greek Sloth Goddess

The Greek goddess Aergia (pronounced AIR-gee-a) is the personification of inactivity or slothliness. She guards the Court of Hypnos in the Underworld, alongside the Gods of quietness and forgetfulness. As she is the goddess of laziness, she spends most of her time sleeping and has servants do her work for her.

Unfortunately, wild sloths do not have staff to do their bidding and will only sleep 7-10 hours per day – this is around the same as a human! To put things into perspective, sloths will often share their trees with troops of howler monkeys who sleep for up to 20 hours each day.

3- ‘Give me a lever long enough, and I shall move the world’ – Archimedes

Sloths are often described as ‘nothing but bone, skin, and fur’ which is not inaccurate but does gives the wrong impression of our robust friends. An adult sloth is approximately three times stronger than the average human, which is the result of some clever anatomical architecture.

The sloths’ evolutionary mantra has been to reduce energy consumption in every possible way – more muscle requires higher energy consumption; as a result, sloths have 30% less muscle mass than other similar-sized mammals. The fibers of these muscles are organised differently from ours, being arranged at an angle rather than parallel to the length of the muscle, which makes their muscles pound-for-pound more powerful than ours.

What does Archimedes have to do with this? The anatomical organisation of the muscles themselves also contributes to their disproportionate strength. Sloth muscles appear to work on a sort of lever system – resulting in an immense volume of pulling strength with very little muscle mass and expending very little energy.

4- Sloths can pull but they can’t push

Sloth muscles are specialized for suspensory ‘upside-down’ locomotion; they produce strong pulling and gripping motions, with very little strength for pushing. This is one reason why sloths cannot walk across the ground like a quadruped; the muscles responsible for ‘pushing’ can not produce enough force to lift their bodies off the ground for efficient locomotion (not to mention their claws also make this very difficult) and it takes an enormous amount of energy which the sloth cannot afford to lose.

This is a similar concept to a crocodile’s bite force – they have incredible force in closing their jaws, but even a strip of tape is enough to prevent them from opening their mouths.  In an ideal environment, sloths would never have to travel in this way, however, due to deforestation, they are having to come down to the ground more and more often.

Sloths are hypsodonts, meaning that like rabbits and horses, their teeth grow continuously throughout their lives. The two-fingered sloths have four razor-sharp pseudo-canines, two on top and two on the bottom. The slight overbite causes the top pair to grow in front of the bottom pair and constantly rub against each other. Every time a two-fingered sloth opens its mouth their fangs sharpen up, maintaining two pairs of very sharp teeth.

As their diet consists of only leaves, they also ingest a lot of tannins. Tannins are the substance that gives dead leaves their brown color and will turn rivers orangey-brown during certain seasons. Sloths do not have the protective enamel layer over their teeth as we do, so the high concentration of tannins dyes their top fangs black, however, their bottom pseudo-canines remain white due to the constant rubbing against their top teeth.

6- Three-Fingered Sloths have more neck vertebrae than a giraffe.

These extra cervical vertebrae allow three-fingered sloths to turn their heads through 270° which, following the sloths’ evolutionary effort to reduce energy consumption wherever possible, is a clever energy-saving tactic.

No one is too sure of the evolutionary purpose of two-fingered sloths having only 5 cervical vertebrae, however, it has been suggested that this abnormality allows two-fingered sloths to tilt their heads all the way backward. This can be useful when trying to access hard-to-reach leaves on the tips of branches! 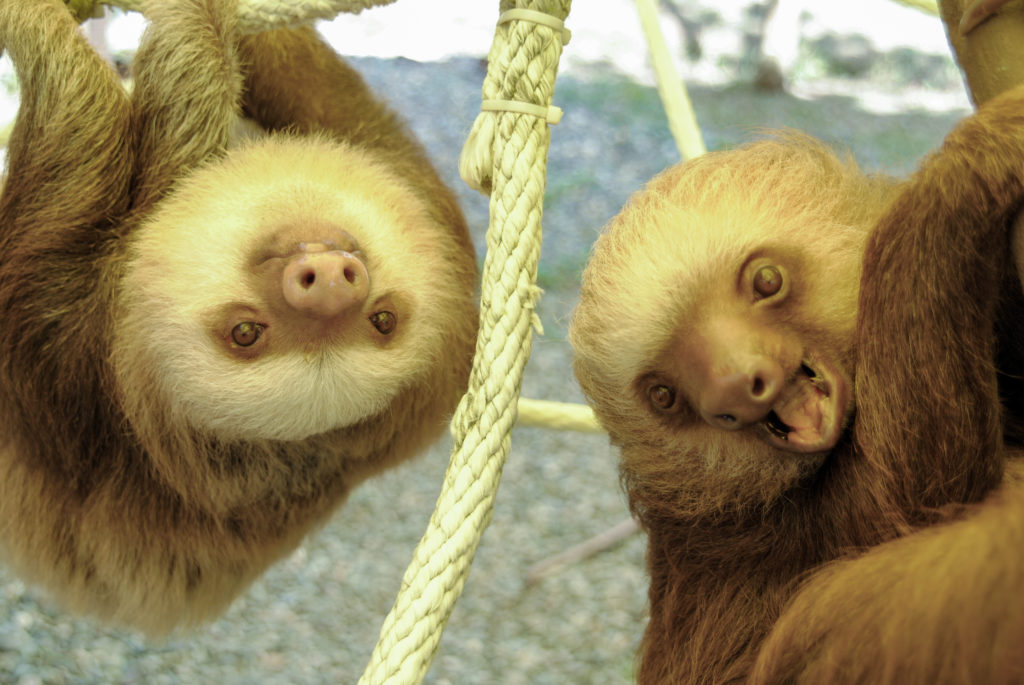 7- Sloths can float thanks to their stomachs

A sloth’s torso is two-thirds stomach. This very large, four-chambered stomach is mostly full of gas from fermenting leaves, which acts as a floatation device. There is a common myth that it is impossible for a sloth to drown because of this gassy stomach (which is not true), but these built-in floaties are certainly an advantage in the water.

Three-fingered sloths are very good swimmers. In fact, they can travel three times faster in the water than on land! It has been suggested that the sloth’s extra cervical vertebrae help to help keep the sloth’s nose above water while swimming.

Unlike vertebrae, the number of rib pairs in mammals varies between species. If you take a look at the two-fingered sloth skeleton pictured, you can see that there looks to be a disproportionate number of ribs – there are 21 pairs! This is the largest number of ribs in any mammal, with humans having 12 pairs and whales only having nine!

In all animals, rib cages function to protect our internal organs. A sloth’s stomach can occupy up to 30% of the sloth’s body weight – a stomach this large needs some extra support and protection! Sloths regularly fall from the canopy (they can fall from 100 feet in the air and survive!) and so having tough internal hardware is important!

Three-fingered sloths also have multiple unique fibrinous adhesions that effectively anchor their abdominal organs against the lower ribs. These evolutionary ‘coat hangers’ support the weight of the sloth’s stomach and bowel whilst the animal is hanging inverted, preventing the lungs from being squashed and facilitating breathing.

Did you enjoy these facts?